Yes, I'm so sad that my kids will be leaving in less than a year that I've started making duplicates.  Well, maybe not exactly.  I've been trying to do some sewing for Ashley but it's hard because she's never home to try anything on.  I've seen instructions for making duct tape dress forms before, but I finally decided to do it.  There were actually two reasons for this.  First, I really do need to try things on Ashley more often than she is home, and second I wanted her to learn how to do this so she could make a dress form for me.  I thought it was kind of a fun project, but then I was the one taping, not the one becoming ever more tightly encased in a duct tape straight jacket.  It was really pretty simple:  I taped strips of file folder together and taped it down her back (to protect her from scissors later), put an old t-shirt on her, and wrapped her in 3 layers of duct tape (short strips, to conform to the curves).  Two hours later I cut straight up the back, through the duct tape and t-shirt, and there was my Ashley double!  We still need to stuff it and decide how to mount it, but I can pretty much do the rest without her.  Now I have no more excuses, I better start sewing. 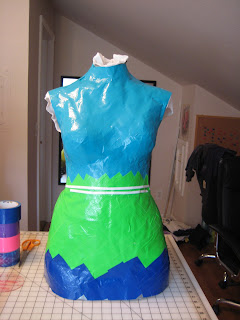