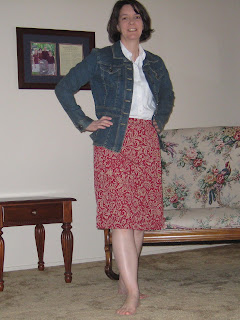 This year I set a goal to make myself one skirt every month. To make things even more complicated, I thought each skirt should somehow represent the month in which it was made. This morning I woke up and realized it's the 31st and I was about to blow my goal in the first month. In my defense, it's been a really busy month and I already sewed a dress for Ashley so I think I could have justified starting in February, but I set the goal and I decided to stick with it.

My theme for January would be thriftiness, since I always try to save money in January to make up for all the holiday spending. Funny how it's easier for me to go on a money diet than on a food diet. This skirt used to be a dress that never fit that well to begin with. I cut off the top, hiked it up a few inches, put on a waistband, and look what I have! Ok, it wasn't quite that easy since I added darts and curves and had to figure out how to get a waistband out of the smallest part of the dress, but it wasn't that hard either. If you don't count the cost of the dress, which was a sunk cost several years ago, the skirt cost me nothing. I reused the zipper from the dress, used up a couple almost-empty spools of thread, and already had interfacing and a hook and eye.

I still have a few finishing details left (ok, I'll admit it, the hem is taped up) but I swear I'll finish by tonight. As a side note, I learned a few things about taking pictures of myself. First, you can't take a picture in a mirror using a flash. Duh. Second, I now know how to use the timer on my camera. Third, this would have been much easier with a tripod.