How much do I love my daughter?

I love her enough to make this for her: 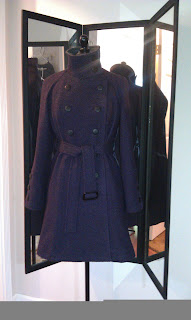 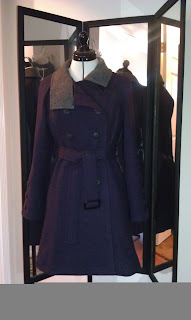 Ashley picked out the pattern and fabric. My "only" job was to put it all together. That didn't sound too hard a couple months ago. And it wouldn't have been if the wool fabric weren't so think and bulky, and if there had been a lining pattern, and if the girl at the fabric store hadn't given me the wrong interfacing, and if I hadn't had to come up with something to line the collar with that wouldn't make Ashley's neck itch.
It all came together pretty well, considering the obstacles, until it was time for the buttons and buttonholes. The coat has 19 buttons. The fabric store doesn't stock more than eight at a time. It took me three trips to get all the buttons. But the worst was yet to come!

My sewing machine has a really nice automatic buttonhole function. I made a couple test buttonholes on a scrap of fabric and they looked awesome! Then I made one on the coat. Not even close to awesome. I ripped it out and made another one. Now ripping out buttonholes is not fun to say the least. It probably took about 15 minutes to take out all those tiny little stitches. Things really went downhill from there. I won't go into great agonizing detail, but in order to get 8 less-than-awesome-but-better-than-hideous buttonholes I ended up ripping out at least 8 unusable ones. There was a point when I actually considered having the coat held shut only with the belt.

This morning I sewed the last button on the last sleeve. It's finished. Parts of the process were even fun. I got to use my handy-dandy new buttonhole cutter (which is really just a sharp chisel). I learned some new things, like if you're going to use an awl to pull the staples connecting the buttons to the card they come on, you should keep your fingers out of the way; and those clear bandaids that come in the variety pack from Costco are waterproof and use some sort of superglue-type adhesive; and it's not a good idea to use rubbing alcohol to try to get that adhesive off your finger when you have an open wound.

I have never been so glad to finish a project. Now with only a couple days left in September I need to start working on a skirt.
at September 28, 2011