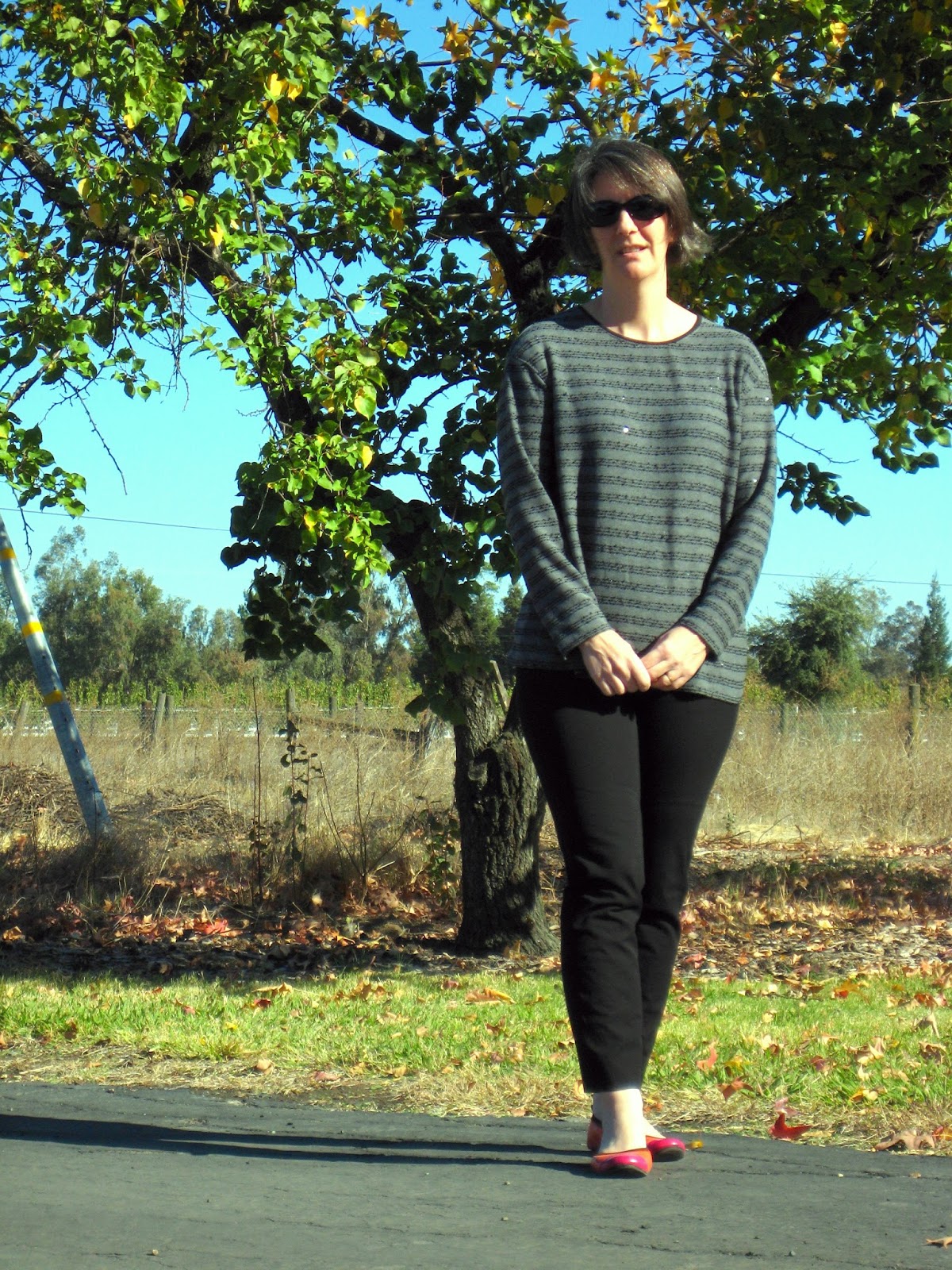 Maybe the world is coming to an end.  I did something that I never thought I'd do - I made myself a sequined top.  Not all-over sequins or anything like that, but yes, there are sequins on this shirt.  I'm pretty sure I've never worn sequins before, not even for Halloween!  I'm NOT a sequin person.

I really wanted to make another version of my sweatshirt pattern, fix any additional problems that cropped up, and have a final copy of a pattern that I can make again and again.  Does that ever really happen, or am I reaching for an impossible dream?  The other "impossible" part of that dream would be finding fabric at JoAnns that I love.  I looked at several possibilities and kept coming back to this gray knit with lines of black yarns and sequins running through it.  I can't say I loved it, but I was definitely intrigued so I bought it. 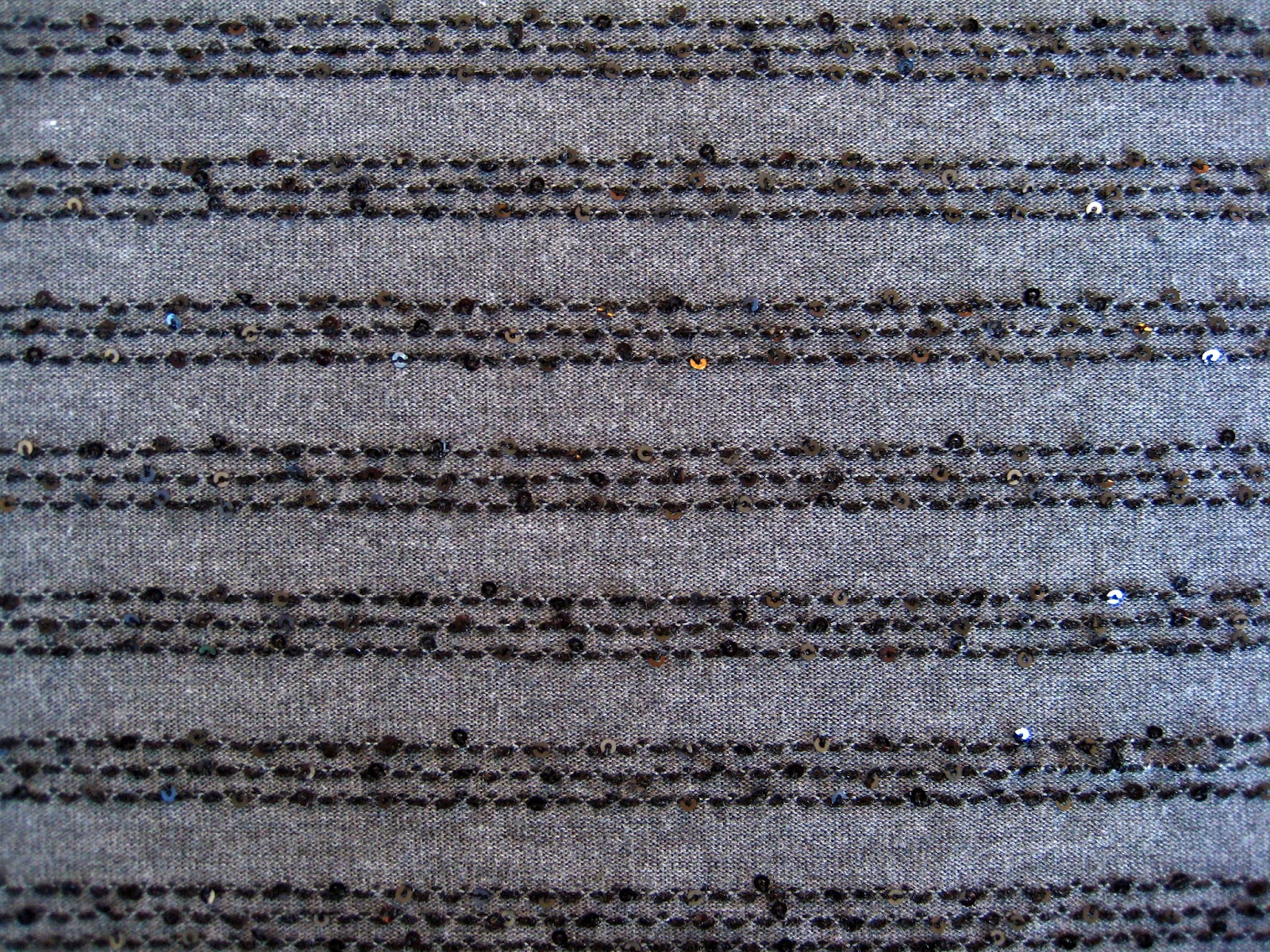 The fabric is labeled "66% polyester 34%        ".  Yep, that's a blank.  I took a picture of the bolt end while I was in line waiting for it to be cut but I didn't look at the picture until today so I had no idea I was using a mystery fiber.  I think it's rayon from the way it drapes but it don't actually care enough to try to figure it out for real.  I planned to make the pattern exactly the same as I did last time and I even found some ribbing that I thought would work better than the ponte did.  However, when I hung the fabric over my dressform it told me it wanted to be something a little more drapey.  (That was my fabric talking - not the dressform.  My dressform has never said a word to me.)

So, sweatshirt pattern take 2:  I moved the sleeve edge of the shoulder seam forward 3/4" (basically by cutting a triangle off the front shoulder and adding it to the back shoulder) and raised the neckline by 3/4" at center front and 1/2" at the shoulders and back.  I decided to hem the sleeves and bottom edge instead of using the ribbing so I made those pieces longer.  I also made a design change in the back.  I hate how knit shirts seem to cling to my lower back when I sit down and then get all bunched up at my back waist when I stand up.  I think (but I'm not positive) that it's because there's not enough fabric to fall loosely over my back hips and behind.  Since this shirt seemed to want to be loose and drapey anyway, I cut the original back piece into a back yoke, then added 4" at CB to the lower section for a pleat at center back. 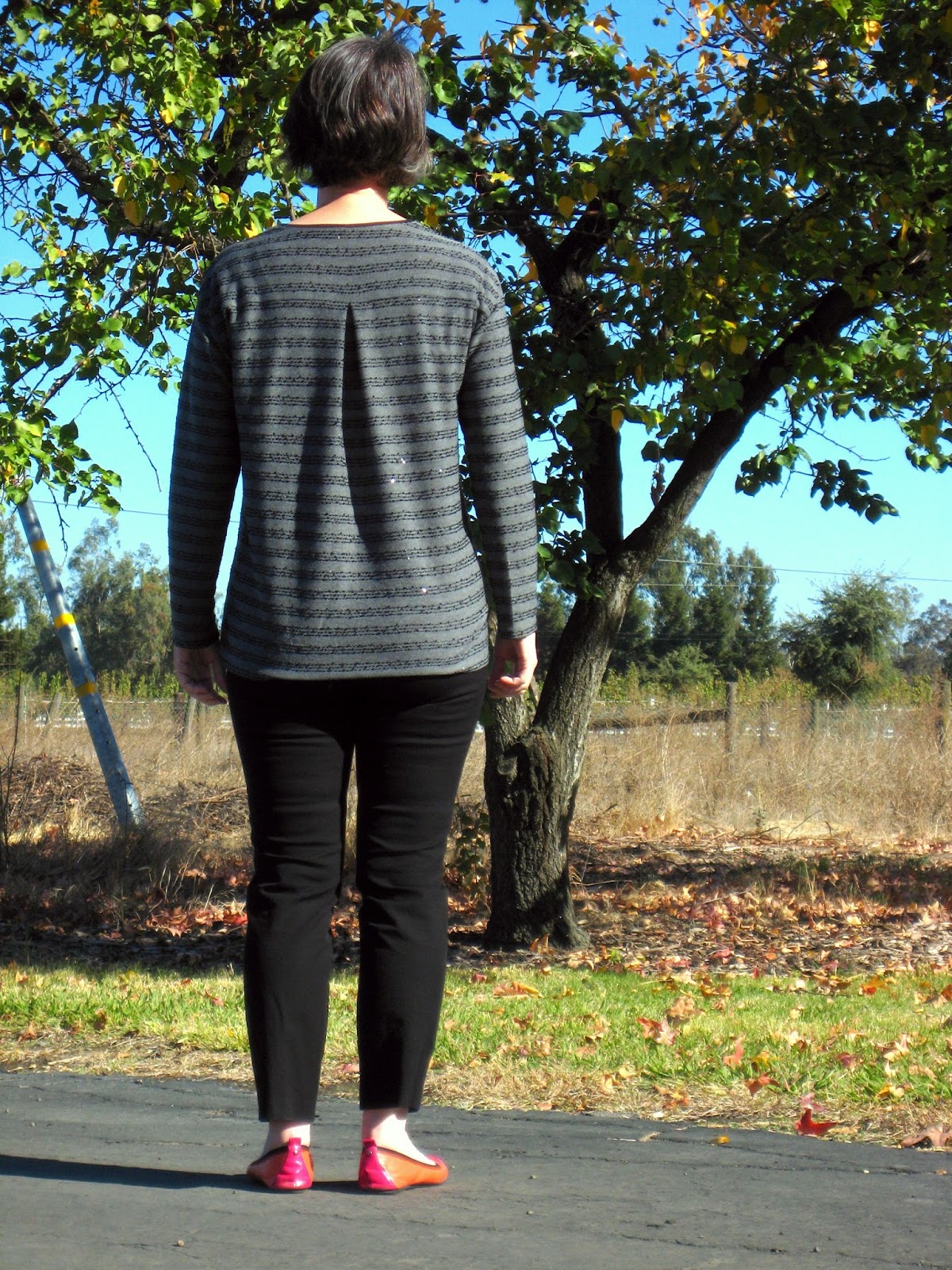 I was a little conflicted about the ribbing at the neckline.  I considered cutting a strip of the body fabric, pulling out the black yarns and sequins, and using it for neck binding.  The neck edge really wanted to be black, though, so I went ahead with the ribbing.  After the shirt was done except for the sleeve and bottom hems I realized I should have done some things differently and I almost threw the whole thing away.  In fact, I planned on finishing it on Friday but I just couldn't face it.  It was one of those feelings of complete failure that for a day or two made me wonder if I should give up sewing.

Here's a list of my failures with this project:
1.  The neck binding should have been black spandex or something else smooth and shiny.  The chunky matte black ribbing (also of unknown fiber content) is too casual compared to the rest of the top.
2.  The drop-shoulder pattern worked well in something thick and with a lot of body, but looks sloppy in this soft, drapey fabric.
3.  While my goal was to make something that looked like higher-end ready to wear (or at least mid-range) I made something that you can buy at Wal-Mart or Kohls for about $10.
4.  Overall, I think I took a fabric with at least a little potential and made something completely frumpy and boring.

After finishing the project, I'm happy to say that I also have a list of successes:
1.  I like the idea of the yoke and pleat in back.  I'm not sure how I'll use that in the future but it definitely has some potential.
2.  My shoulder seams are in the right place.  That part of the pattern is fixed!
3.  This top is really comfortable!  If I decide to never wear it in public, maybe I'll sleep in it.
4.  I kind of like the shirt belted.  It's not my normal style so the belt I'm wearing in the pictures is a really cheap one that came with a skirt I bought, but I think I can pull it off. 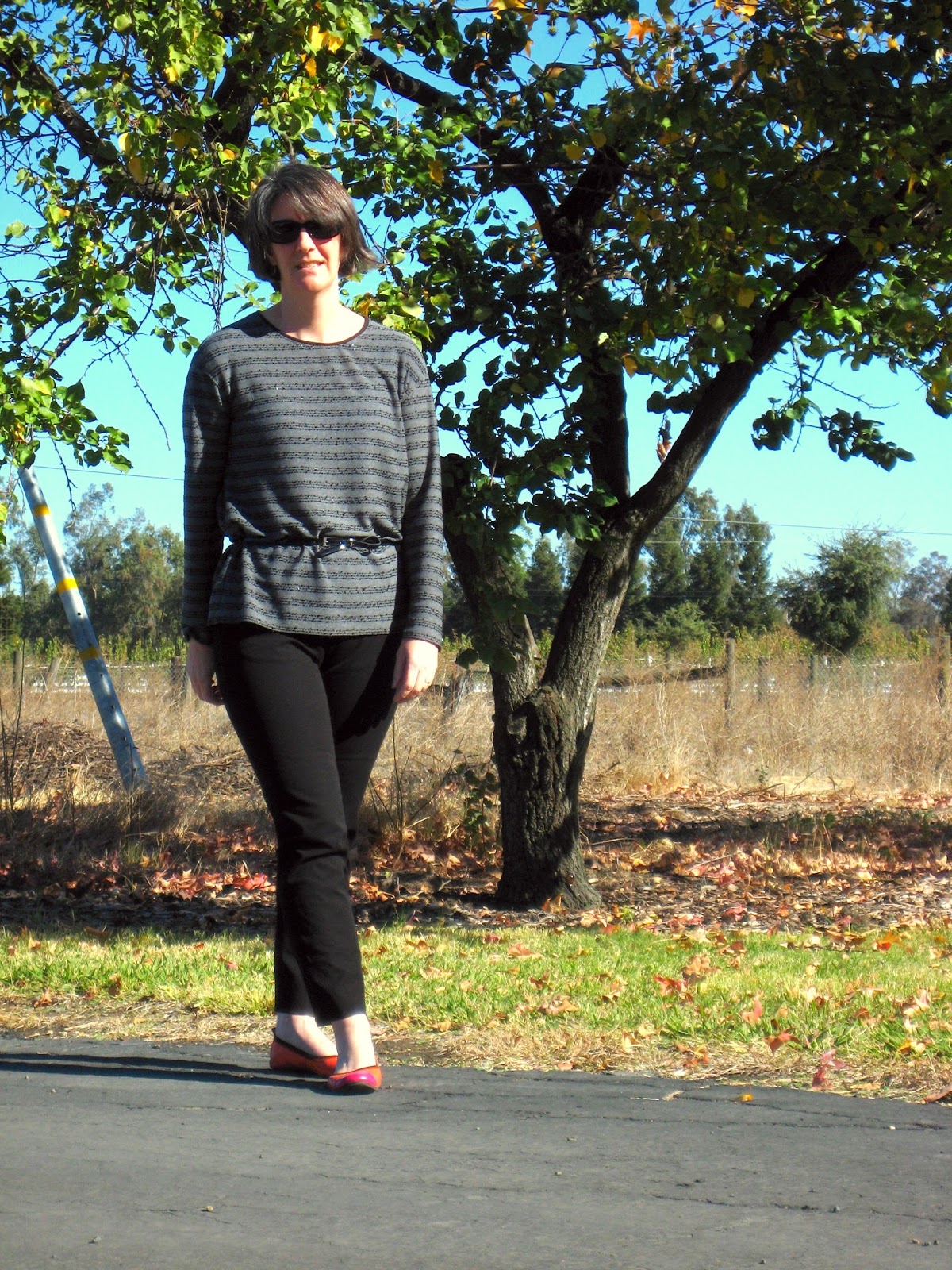 A couple more funny or interesting things to note:  I have a 6-year-old point and shoot camera that I really loved when it was new.  Now my 2 1/2 year old phone takes better pictures, but only when I'm holding it so I can't use it for most of my blog pictures.  I also don't have a tripod, so today I used my car bumper.  Oh, and I'm wearing sunglasses because I didn't want to put on makeup. Yep, I'm that lazy!