My desire to make my own jeans began a couple years ago when I wanted to make a pair of pants.  I thought it might be easiest to adjust the fit by comparing a pattern to a pair of pants that already fit.  I rarely wear dress pants so I thought I'd start by looking at some jeans that fit well.  I had several pairs that seemed to fit, but to make sure I decided I better take some pictures from the back.  Yep, I set my camera timer and took some shots of my rear end.  And I decided that day to never wear any of my jeans in public again!

Since then I've worn the offending jeans many times, because, you know, I had to leave the house eventually and a bathrobe just doesn't go over well in the grocery store.  But my quest for custom-fit jeans had begun.  I bought denim.  I bought patterns.  I bought two Craftsy classes (but didn't necessarily watch them).  And then I waited, but other projects got in the way and the jeans never materialized.  Until now, that is.

Because I like to figure things out on my own and not follow someone else's instructions, I decided the best way for me to start was to make a basic pants pattern, get it to fit, and draft a jeans pattern from that.  I used Vogue 1293 for the basic pattern, minus the pockets.  They have a lowered waist and the fit is slim and tapered, a fairly good starting point.

I made my first muslin without any fitting changes.  Then the fun began.  As with ready-to-wear jeans/pants, the front fit fine but the back didn't.  It's really not very fun or easy to fit the back of pants by yourself!  With the help of a tripod, camera timer, pins, trial and error, and a whole lot of patience, I managed to somewhat fit the muslin to my body and altered my pattern accordingly.

Then came muslin #2.  I had to talk myself into making several muslins before I even started this project or I totally would have given up at this point.  I hate making muslins, which is probably why I have so many nearly-completed projects that I know I'll never wear.  #2 didn't look great, but I kept plowing ahead, trying to get a better fit.

One thing that really helped in this process was that when I got stuck I put the project down and walked away.  Usually at night as I was falling asleep I would think of a solution to whatever fitting problem I was having that day.

By muslin #3 I was almost there, so I tweaked that version of the pattern just a little, drafted the yoke, pockets and fly, called the pattern Jeans #4, and cut it out of denim.  For pocket sizes and shapes I sort of measured a few old pairs of jeans and averaged or estimated measurements from there.  It work out fairly well, for the most part.

One thing I learned while measuring my old jeans:  in ready-to-wear the center back is between the rows of topstitching, not along the seamline.  That's the way I always thought it should be but I'd never actually measured before.  I'm not sure how sewing patterns handle this since I've never read the directions for any of the jeans patterns I own, but here's how I handled it:  I laid the back pieces (with yoke already sewn in place and topstitched - and in this case the pockets too but that was unnecessary) right sides together, with the right back seam allowance extending 1/2" past the left back seam allowance, stretching slightly to fit.  I marked a stitching line at 3/8" on the left back seam allowance (which would be 7/8" on the right back) and stitched along that line. 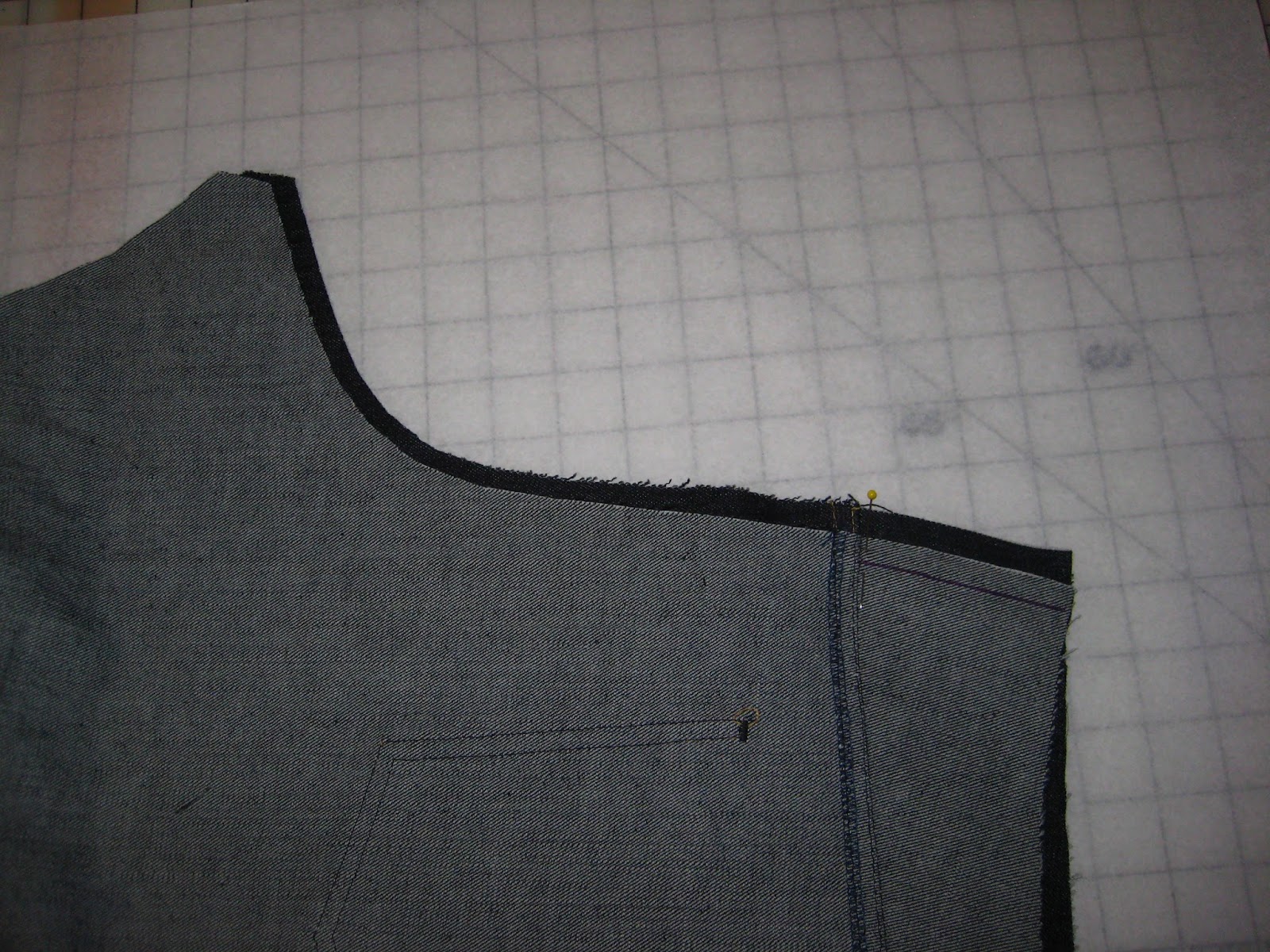 After stitching, I folded the excess seam allowance from the right back over the left back seam allowance and pressed in place.  Then I folded the whole thing toward the left back and topstitched two rows on the outside.  I used my topstitching foot for this, with the first row 4 needle positions to the left of the seamline and the second row 1/4" from the seamline.  It actually looks like jeans! Well, except for the weird grainline on the yoke but that will be fixed in the next version. 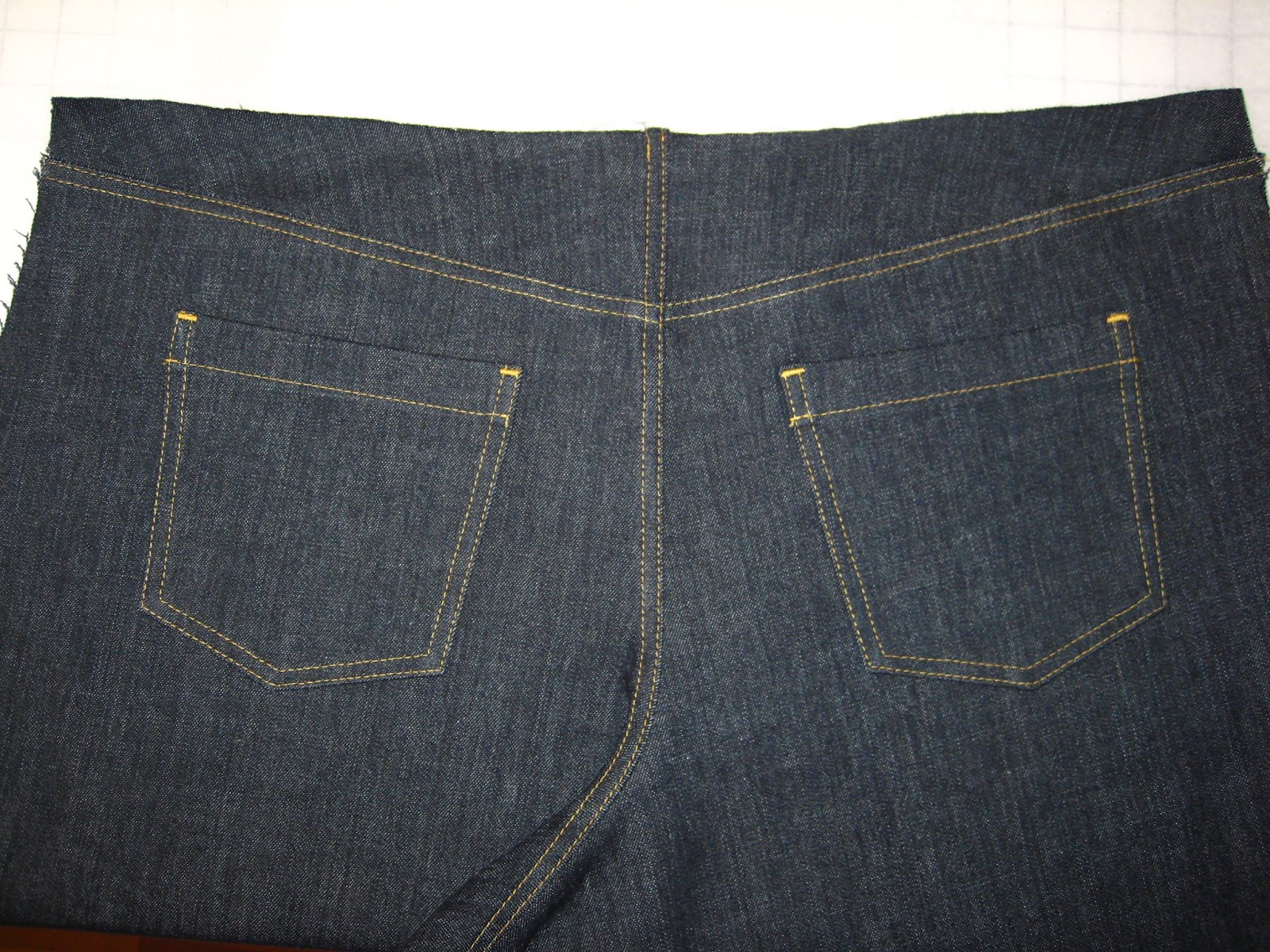 And here's the inside.  I serged the seam allowances together where the yoke meets the back and pressed them down.  I could have done a flat felled seam here as well but that would have created a lot of bulk at the point where the yoke and center back seams meet.  I haven't decided for sure how to do it in the future, but for these jeans I'm satisfied with this seam. 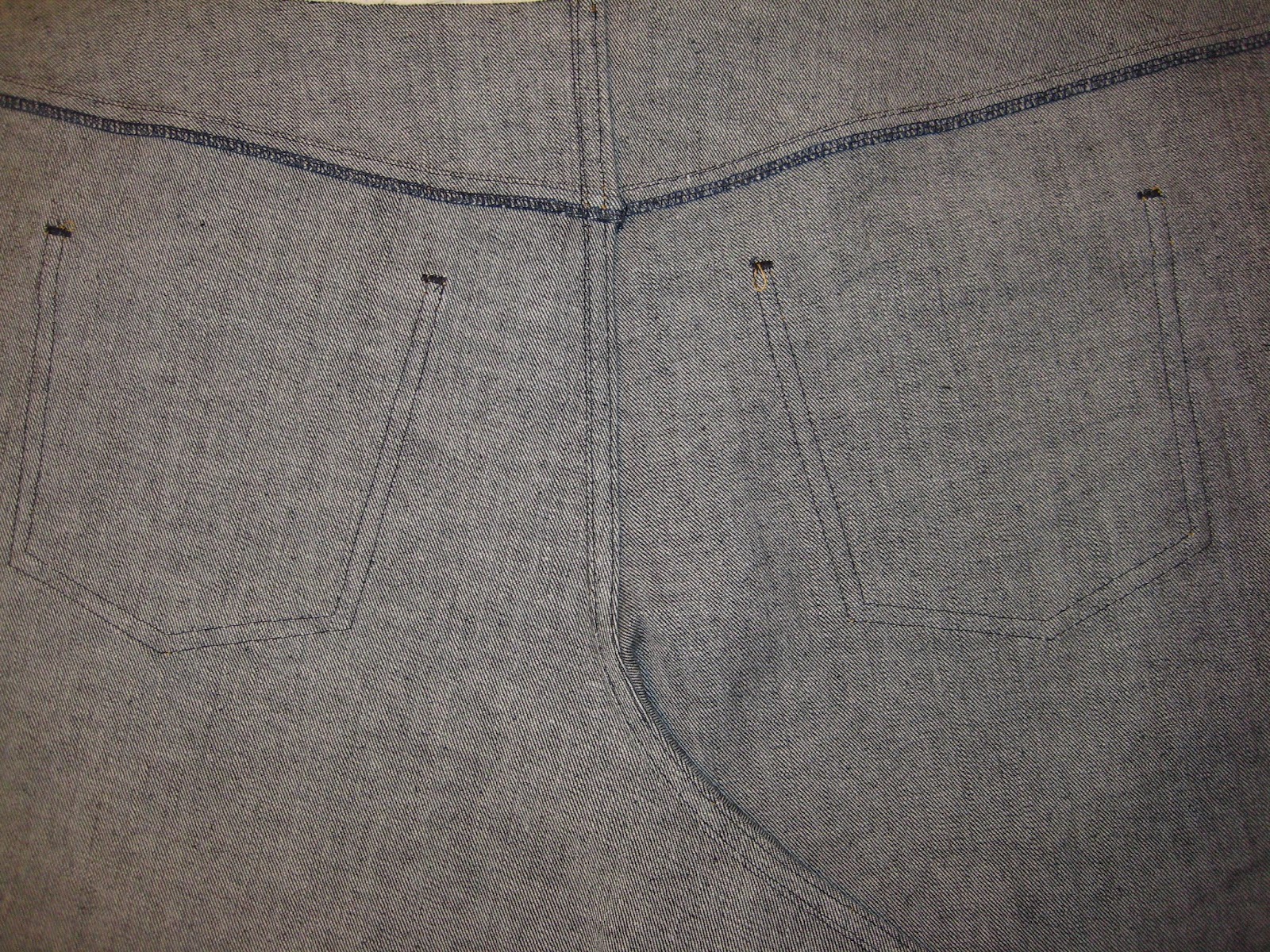