I love my white denim jacket and I've been wearing it a fair amount, but I wasn't 100% happy with the pattern or the fit It's actually too small across the hips and I can't fasten the bottom button. There are very few, if any, situations where I would button up the jacket, but it still bothers me. So despite having no need and very little desire for another denim jacket I plowed ahead with number 2.

I had some dark denim that I bought to make jeans but I hadn't gotten around to using it primarily because even after a few washes it still turns everything it touches, including the inside of my dryer, blue. (BTW, Mr. Clean Magic Eraser will remove blue stains from the inside of the dryer.) So first order of business, get rid of some of the dye!

I didn't want to do anything drastic, just remove the excess dye, so my first instinct was to use Rit Color Remover. I read the directions on the back of the box, filled my garage sink with hot water, got my chemical-resistant rubber gloves out, set the fabric out, then I opened the box and read the complete directions where it says in teeny tiny letters "do not use on blue denim." Not to be deterred I checked the Rit website where it explains that Rit Color Remover does not work on the indigo dye used on denim because it will dissolve the dye into a soluble form, which is then absorbed back into the fabric when the Color Remover is rinsed away. But since I had everything ready to go, and there were no warnings about dangerous chemical reactions or anything like that, I went ahead with my color removal plans to see what would happen.

After dissolving the Color Remover in the water and adding the denim, the water quickly turned from pale green, to thick pea green, to murky dark blue. 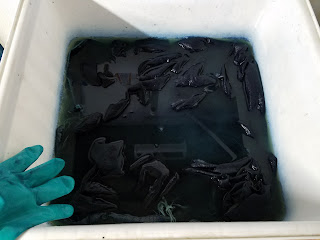 At least some of the dye was leaving the fabric, right? I stirred the fabric constantly with my gloved hand so the color would be even, and after about 25 minutes fatigue won out and I drained the sink and rinsed the fabric.

"A big long pink cat ring!
It looked like pink ink!
And I said, 'Will this ever
Come off? I don't think!'"

That's what I thought when I looked at the sink!: 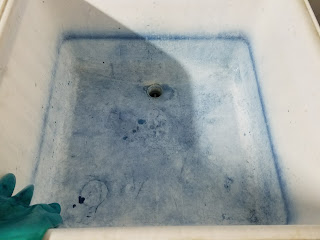 (BTW, Mr. Clean Magic Eraser will NOT remove blue stains from a vinyl garage sink. But lots of Comet helps.)

And the results on the fabric (top is untreated, bottom is after color removal): 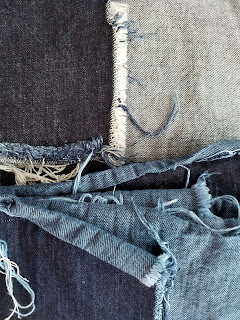 The right side is slightly lighter and the wrong side is considerably bluer. *Sigh* But hey, I was warned, and now I know.

At this point there wasn't much to do besides use the fabric as-is. There were lots of pattern changes which I won't detail here because for the upcoming version #3 I used all the pieces to make a rough jacket block then redrafted the whole thing.

Funny thing, on the day I was scouting the mall for the best denim jackets, trying to decide what details I wanted to include in my "final" version, Alina Design Co's Hampton Jean Jacket pattern was released. I've got to say, I LOVE all the pictures I've seen of this pattern sewn up. I would buy it, except that I've already invested a lot of hours into coming up with a pattern that fits my body and my needs (except that I neither need nor want another denim jacket, but that's beside the point...).

By the time I finished my second jacket I pretty much hated it. The fabric was stiff and it turned my fingernails blue every time I worked on it. Which left only one thing to do - bleach the heck out of it.

If I loved the jacket I probably would have tested some samples in the bleach, but with nothing to lose I jumped right in. I filled a 5-gallon bucket about halfway full with approximately 5 parts hot water and 1 part bleach, mixed it with my gloved hand, and added the jacket which I had previously soaked in water. I kept agitating the jacket with my hand so it would lighten evenly, and the bleach worked so fast I could actually see the fabric getting lighter! After only about 6-7 minutes in the bleach solution my jacket was lighter than I had planned and I was desperately trying to dump out the bucket without hurting myself (safety goggles would have been really helpful!) and get the bleach rinsed out. The jacket went into the washing machine where it was washed in hot water, then dried on high heat, and here it is!: 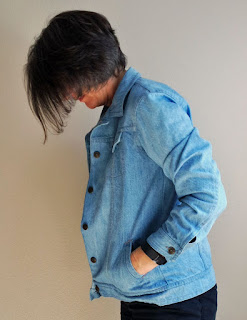 Before and after color: 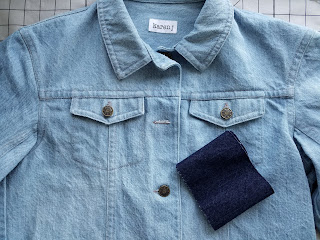 Ok, I may have used too much bleach but at least I didn't have to wait around for it to work, right? It's not a great color for me so I'm not sure how much wear I'll get out of this. But it was absolutely worth all the lessons learned! I've made a lot of pattern changes and pattern #3 is ready to cut out, as soon as I decide what fabric to use. Another white denim jacket? White linen? Blue denim with less bleach? I'll think on that for a few days, and in the meantime I'm working on something quicker and easier to make.