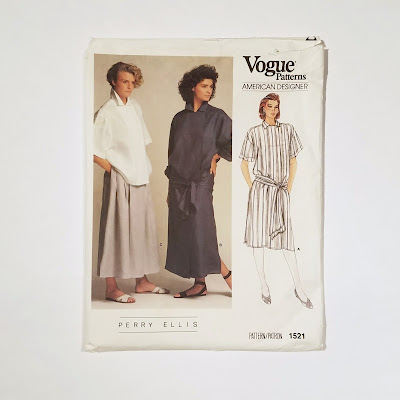 This story begins with an unfortunate online fabric order. I know, I know, I could order swatches, but when I decide I want fabric I want it NOW! So I ordered 3 yards of Stonewash Blue Tencel Twill from fabric.com. At $18 per yard it was more than I normally spend, but I knew the tencel would be nice, and between the color description and the online swatch (on multiple monitors even) I expected it to be the color of a nicely broken-in denim shirt. Not so. Not a bad color but not at all what I expected. Not quite blue and not quite gray, it reminded me a little bit of Crayola's cadet blue, one of my favorite childhood crayon colors, and a little bit of the French blue commonly seen in 80s kitchen decor. I didn't hate it but I knew I couldn't wear it near my face.

Maybe it was the 80s kitchen vibe, or maybe the fabric actually whispered to me, but after we stared at each other for a few weeks I realized it wanted to be made into the skirt from out-of-print Vogue 1521, a Perry Ellis pattern I bought in 1986. Now I must admit I love the 80s. I became a teenager in 1980. I graduated from high school and college in the 80s. I got married in 1989. My best growing up and coming of age memories are from the 80s. So maybe it's not that strange that this year as I turned 50 I wanted to make a skirt that would take me back to those days. And I wanted it to work.

There were two obvious problems from the very beginning. First, I used a size 8 pattern in 1986 and I'm not a size 8 now. It's a one-size pattern. Second, I made the skirt in 1986 and it didn't work for me then. More on that in a minute.

The first problem wasn't too hard to overcome. I made the waistband longer and decreased the depth of each pleat. It should have been simple to figure out but the waistband opens into the pocket and it took a bit to figure out the relationship between pocket, pleat, waistband and sideseam. I ended up pinning and pleating the pattern pieces so I could visualize it, and in the end it explained problem #2 above.

In 1986 I made the skirt out of a stiff, heavy cotton. So. Much. Fabric. The pleats are deep, they overlap (unless you're making them shallower to fit a larger waistband), and the pleats on the sides overlap the side seams and pockets, leaving several layers of fabric right at the side. It's an interesting design feature. As in "who would have thought of that?" kind of interesting, not "it's such a great idea to bulk up women's hips" kind of interesting. I never actually wore it back then. I ended up cutting it apart and making a slim-fitting skirt from the abundant amount of fabric. But because I was using a fabric with more drape this time around I somehow thought it would work. No such luck. Again, yards of fabric pleated around my hips and hanging nearly to the floor did my body no favors.

And here it is, wrinkled, unhemmed, and modeled so elegantly with my pajama top. Because I felt so frumpy in it I didn't feel the need to try to make it look any better. 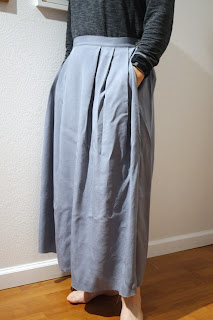 I could have cut the skirt apart at this point and had two very large rectangles of usable fabric, but it told me it wanted to be this skirt and who was I to argue? In the end the solution was obvious. I pressed the tops of the pleats as flat as possible and hacked 6" off the hem. I'm still not sure it's "me". I always feel a little funny wearing full skirts, but it's probably something I should embrace during our hot summers. 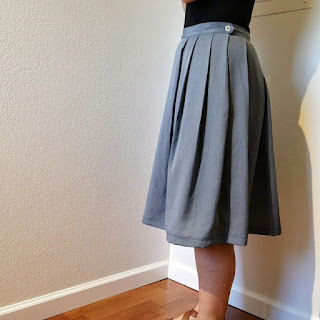 Lesson learned: The 80s had great music, movies and memories, but great fashion? Not so much.
at December 10, 2017