Down the Jeans Fitting Rabbit Hole

Maybe this post should be called "That time I spent a week tracing patterns and didn't actually make jeans."  Regardless, it's been a fun journey, one that's kept me awake at night for the past week, and I think it's been worthwhile.

It all started because I found this pattern at a used pattern sale: 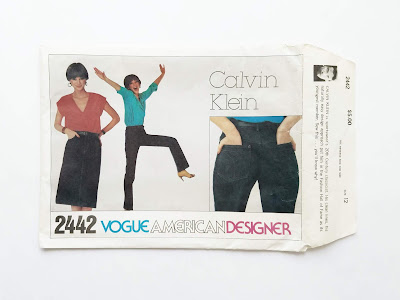 I remember seeing this in the pattern catalogs when I was a teenager. I couldn't afford a real pair of Calvin Klein jeans and I wouldn't have been caught dead in a homemade pair. Name brand jeans were a big thing in the 80's. Now that I'm well past that time in my life I've made quite a few pairs of jeans. Nobody has ever asked what brand they are, so I guess they don't care. (And even if they did, I don't.) I don't feel any need to own vintage designer jeans, but I'm curious about the quality of this pattern and let's face it, I have a place in my heart for all things 80's.

But here's the thing. Most of my me-made jeans are from a self-drafted pattern which I've been slowly perfecting over the past few years. I've bought jeans patterns but then I decide I should stick with the pattern that works instead of starting from scratch. There have been a few exceptions, and I'm going to compare them in this post to see what I can learn from their similarities and differences. The patterns I've purchased and sewn are:

1.  Chi-town Chinos by Alina Design Co. which are not jeans, but I made the fitted knee-length shorts so the fit is similar to jeans.
2.  Morgan Boyfriend Jeans by Closet Case Patterns
3.  The FREE Peppermint Magazine Wide Leg Pants, designed by In The Folds which again are not jeans, but I made the upper part fitted like jeans, the fit is amazing, and I love them with all my heart! Haha, but seriously, see my last post for more details.

***Time for a giant disclaimer here!! Anything I say in this post about the fit of these patterns is not meant to be a criticism of the patterns. All three are wonderful patterns. They are drafted for different body shapes, not necessarily mine, and isn't it wonderful that there are patterns out there representing so many different shapes? I chose to sew all three pretty much as drafted so I could see what shapes they were designed to fit. ***

There are dozens of places where jeans can fit wrong -- waist, hips, thighs, calves, length, rise, angle of legs, dart shaping in yoke, back waist gap... the list could go on. My biggest issue with jeans is the way they fit in the back. Because really, isn't that what we all want from a pair of jeans? a nice looking behind? (Or at least one that isn't obviously bad looking?) And there are a lot of measurements involved in getting this perfect fit:

Rise:  The vertical distance from crotch to waist, without going over or around any curves
Crotch length:  The distance of the crotch curve from front waist to back waist. I prefer this measurement to be divided into front and back crotch length because some people have more distance around the abdomen and some have more around the behind.
Stride: This is a men's term, but I don't know why women don't use it, or at least some variation. It's the distance from the crotch point, under the bum, and diagonally up to the intersection of the side seam and waist. I think it's technically the amount of fabric you need in that area of your pants to take a step.
Hip Circumference:  Usually measured at the widest part of the hip, but that measurement can include the largest part of the abdomen, thighs or behind, or just one or two of the three, and the perfect pattern shape will differ depending on which of those areas needs the extra room.
Hip depth: The distance from the largest part of the hip to the waist, measured against the body. The measurement will be different at center front, side, and center back, depending on where the curviest parts of the body are.
Waist circumference: The distance around the waist.

To complicate matters, knowing all of your measurements still doesn't always help because different pants and jeans have design differences in rise (front and back), side seam placement, and inseam placement. And to complicate things even further, a change to a pattern for one of these measurements will affect the others.

I tend to get a lot of folds under my bum and the waist pulls down in back when I sit. Fitting books and tutorials address this in different ways. Some say to add length to the back crotch length by extending the "hook" horizontally, some say to slash from center back seam to side seam and add a wedge, and some use a quick method of extending the center back seam higher then blending the back waist back down to the side seam. Some say to "scoop" the back crotch hook more, but only by 1/4" or so. My favorite methods have to do with "body space" and making sure the depth of your body will fit within the curve of the pattern. There are dozens of tutorials online for using a flexible ruler or foil "rope" to duplicate your body space. However, I've never seen one that explains how close to your body to measure the shape. Maybe some do, but I've never seen it. Probably because there is some personal preference involved. Some people like their pants to have an extreme wedgie while some favor the mono-butt look. (Don't know what that is? Google it!) I'm somewhere in between. Jeans and other close fitting pants generally have a higher, tighter crotch because that allows for greater range of motion. Kind of counter-intuitive, I know, but try to imagine walking in a pair of pants with tight legs and a low crotch -- it really wouldn't be comfortable. 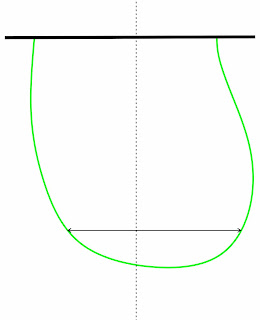 Umm, this is my shape - side view, cross section, the heavy black line is my waist. Yup, putting that on the internet for the world to see. And to be honest, this shape doesn't fit many RTW clothes. Good thing I can make my own! I have a short rise, I'm pretty shallow front to back, and the fullest part of my bum is lower than average which makes the lowest part of my body space curve fairly wide. I know this is my most challenging area so I set out to find the back crotch curve shape for my body.

In the interest of research, I traced all 5 patterns mentioned above onto one piece of paper. The Calvin Klein pattern has the crotch line marked on the pattern pieces, perpendicular to the grainline and through the crotch point on both front and back. I marked a crotch line the same way on the other patterns, lined them all up, and here's what I got: 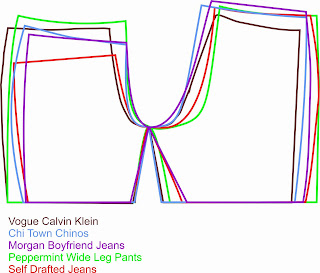 The first thing I noticed is that the angle from the crotch line to the front inseam is basically the same on every pattern. I don't know the significance of that but it's a bit of knowledge that may come in handy someday. Also, I know these aren't the actual crotch lines on the patterns because the distance from crotch line to waist should be the same on the front and back pieces. That makes the whole similar angle thing more perplexing. But that's a rabbit hole for another day.

The second thing I noticed is that there is a lot of difference in the crotch curves. Which brings me to the whole point of this project -- which crotch curves fit me best, and why?

Most tutorials out there will agree that the body space needs to fit within the curve, but they don't agree on how to measure the curve. Some will line the front and back up as above, and some will line up the inseams, which opens up the curve. Some of my patterns have a very sharp angle between crotch and back inseam, so lining up the inseams opens the curves up a ridiculous amount. I finally came across this forum discussion which didn't answer my question, but led me to think the answer lies in lining up the inseams at knee level, not at upper thigh, and observing how much the curve opens up. I measured my patterns' body space width both as arranged above and with the inseams matched at knee level, and while the measurements changed, they kept the same order from smallest to largest body space.

Here is a comparison of the patterns that fit me best: 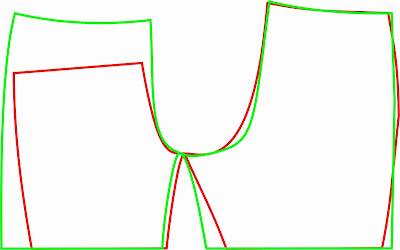 These are my self-drafted jeans (red), which after 8 versions should fit me pretty well, and the Peppermint Wide Leg Pants (green). I lined up the front crotch curve instead of the crotch point so I could compare a little better, and I think I'm on to something! My self-drafted jeans have the tiniest bit of pull across the front crotch, and I can see that the better-fitting curve of the wide leg pants is the slightest bit flatter in that area. I'm currently wearing the wide leg pants, and I noticed this morning that I scooped the back crotch a little too much, resulting in a bit of mono-butt. Overall I was surprised to see how similar these are, but I guess I shouldn't have been since they both fit really well. Between these two patterns I think I've found the perfect crotch curve for me!

And now for the patterns that don't fit as well: 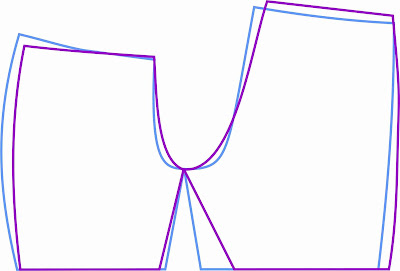 The Chi-Town Chinos (blue) have a fairly narrow U-shaped curve that's almost symmetrical front to back. The Morgan Boyfriend Jeans are even narrower with closer to a V shape. I have seen both these patterns on other bodies and they look fantastic, but considering how different they are from my ideal pattern shapes it's pretty easy to see why I don't love the fit on either of these. These shapes make sense with these patterns because the Chi-Towns are drafted as chinos, which should be looser fitting than jeans, and the Morgans are boyfriend jeans, which again are a looser fit. However, both fit me really close in the thighs so for me the crotch needs to fit more closely.

And now to answer the question this whole journey started with: Is the Calvin Klein pattern worth trying? 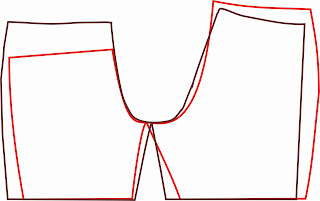 Red is my self-drafted pattern. Brown is Calvin Klein. I think we have a winner! I'll move the inseam forward, but I think all other alterations can be done while baste-fitting. Now I can put my extra patterns away, get off the computer, and start sewing!