I've always been pretty sure that New York City would be someplace that I would absolutely hate.  I dislike crowds and noise and cities in general.  A few months ago Ashley asked me to come with her on an upcoming BYU trip to New York and for some reason I said yes.  I guess the thought of spending a few days on vacation with my daughter and the safety of seeing New York with a tour group combined to make me think it would be a good idea.  Actually, it was a great idea!

We flew from Salt Lake City to New York on April 21.  We stayed at the Hotel Edison, half a block from Time Square.  It was built in the 1920's and some of it hasn't been updated since then.  The art deco lobby was charming, the antiquated plumbing not so much.  However, it was comfortable, safe and clean, and the location was amazing.  I'd gladly risk a cold shower or two and stay there again. 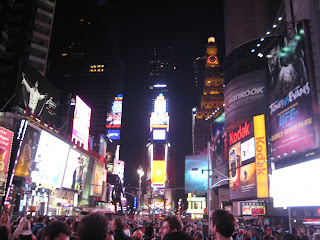 This was my first impression of Time Square - lots of noise, lights and people, and I loved it!  We ate dinner at Juniors (known for cheesecake but I honestly can't recommend the club sandwich) then walked around and shopped for the rest of the evening.

The touristy part of the tour started on Sunday.  We went to church in the morning, which is an amazing way to get away from the tourists and see what the locals are really like.  Then we took the ferry past the Statue of Liberty (we didn't get off) then to Ellis Island where we had time to wander around. Apparently I cut off the top of the torch in this picture, but in my defense it was windy and rainy and I pretty much just whipped out the camera, snapped the picture, then ran for cover.  Also, we were pretty jet lagged on Sunday, in addition to being extra tired from sleeping in a strange hotel room with people we barely knew and being woken up by sirens and other strange city noises all night long.  That must be why we spent over an hour at Ellis Island and I don't think I can tell you one important thing we saw.  In fact, the whole time I kept getting confused and thinking we were at Alcatraz. 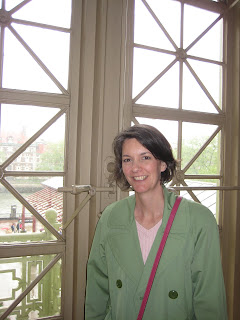 This is me at Ellis Island.  I look a lot more awake than I felt. 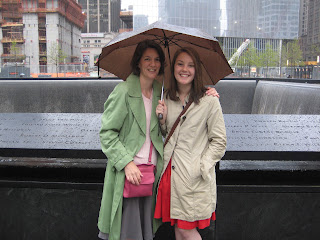 Next stop, 9/11 Memorial.  It's a beautiful memorial, with two huge waterfalls in the footprints of the twin towers (we're standing next to one of them).  There is lots of green open space, and I think when it's finished it will be a place where people come to stop, think, and remember.  At the moment, getting to the memorial is a little less than peaceful because you have to wind your way through barricades, go through security, and show your ticket several times before you actually see where you're trying to go.  Hopefully when it's done the process will go a little more smoothly.

On Monday we started the "school" part of our adventure.  The students in the group had a variety of majors, but went under the umbrella of "fashion students".  There were some in retail, some in education, and some in costume design.  They were all in some way related to my major (fashion merchandising) so I really enjoyed being with this group of students, parents and professors who share my interests.  We started with a visit to the Tobe Report, a fashion forecasting service.  After a quick stop in the financial district (NYSE, Federal Reserve, tall gray buildings, narrow streets, and a tour of Federal Hall where George Washington took his oath of office on April 30, 1789) we moved on to an interior design showroom where I learned that there are enough people who will drop $40,000 for a dining room table that there are showrooms full of such tables.

I should mention that we got around the city by subway.  We had a very detailed itinerary that gave us specific directions such as:  "Walk east on 47th St. to subway entrance.  Board the Downtown N Local to the 34th St. Station (2 stops)."  Luckily we had a guide with us at all times who taught us how to use our Metro cards (don't mess up when you swipe it because you won't be able to swipe it again for 18 minutes!) and told us when to get on and off the train.  The subway wasn't scary at all, not like in the movies where the lights flash on and off, the trains run into each other, and every passenger gets mugged or murdered or rescued by an action hero.  However, I never could figure out which train we were on or which stop we were coming to.  Several girls in our group ventured out on their own and ended up in Queens when they were trying to get back to the hotel, so I'm obviously not alone in my confusion. 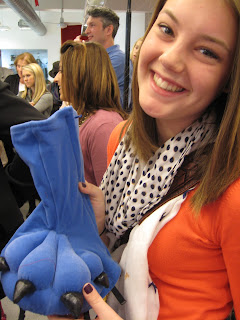 We started Tuesday by going to a costume shop.  This is Stitch's foot from a Disney on Ice thing.  We also saw some Lion King costumes.  It was fun to hear the stories of so many Broadway costumes.  Next was Women's Wear Daily, then Fashion Institute of Technology, then some time for shopping! 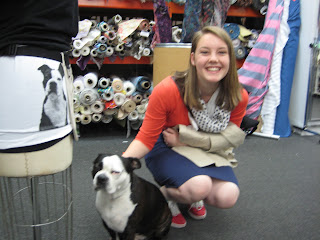 For Project Runway fans, like Ashley and me, going to Mood was a dream come true.  We didn't buy any fabric but we had fun looking at it all.  The highlight, however, was seeing Swatch, the resident dog.  Doesn't he look like he's going to bite me if I don't get that camera out of his face?

Tuesday night we saw Wicked, then waited at the stage door to get autographs from and pictures with the actresses who played Galinda and Elphaba.  Well, Ashley got pictures with them since that's her thing, and since this isn't her blog I'm not posting those pictures.  This is supposed to be about my trip, right?

Wednesday - more appointments.  First, Anna Sui boutique where we heard a lovely story from a Chinese immigrant who gave up her career as an actuary in China, moved to the US and took a job carrying huge rolls of fabric up and down six flights of stairs in a building without an elevator, was befriended by Anna Sui, and worked her way up in the fashion industry.  Then we had time for lunch and a little shopping in Chinatown, then a tour of Macy's flagship store.  It pretty much looks like any Macy's store on the inside, only bigger, but it's being remodeled and it should be beautiful when it's done.  Luckily they're keeping most of the wooden escalators. 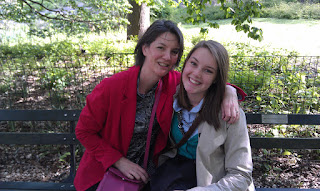 After Macy's we toured Anne Klein Suits, walked through Central Park, then went to the Metropolitan Museum of Art.  There were various subway trips in between there, and at one point we traveled through Grand Central Station (or was that yesterday?) but the subway experience is all a big blur to me.  The Metropolitan Museum of Art was kind of a blur too, as we tried to not get lost as we moved from section to section.  We tried to see as much as we could as quickly as we could, before our next adventure, which was a solo bus trip.  Ok, not exactly solo since there were two of us, but no tour guide, only the somewhat vague directions to take the 1, 2, 3 or 4 bus down 5th Avenue to 47th.  The bus ride turned out to be easy and uneventful, and we made it back to the TKTS booth in Time Square in time to get half price tickets to Newsies. 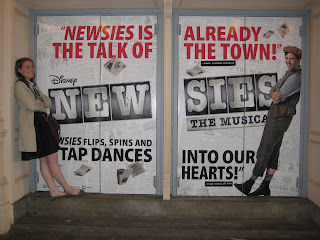 If you haven't seen the movie Newsies, go rent it now.  If you can find it anyway - it came out in 1992 I think.  It was great then, and it's even better on Broadway.  In fact, if you're going to be in New York before August you should really see this show before it closes.  I wish I could see it again.

Thursday, our last day, we were on our own until it was time to take the bus to the airport.  (This was a tour bus, not a city bus!)  We had one last breakfast at the deli by our hotel then took off on foot to the Empire State Building.  It was much easier to walk the twelve blocks than try to figure out the buses or subway. 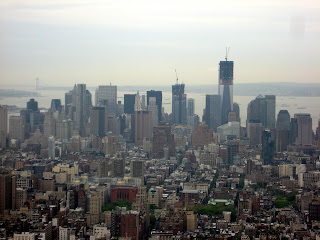 It would have been better to see the view from the Empire State Building earlier in our trip so I'd have a better idea where everything is.  This is facing south-ish.  The tall building on the right is the new World Trade Center building which is currently under construction.

By this point we were pretty much shopped out but we still had a lot of time to kill before we left.  We walked to Rockefeller Center, looked around, got some lunch, then walked back to Time Square and ate the hugest pieces of cheesecake I'd ever seen.  I guess New Yorkers have no concept of appropriate serving size when it comes to their cheesecake.  Just kidding, kind of.  I love cheesecake but I barely made a dent in my slice.

This trip changed my life, but I'm not sure how just yet.  For a few days I got to live in a culture that was new to me, with people who share my interests, dreams and values.  I experienced a new kind of relationship with my daughter as I saw her take charge and look out for me when we were doing things she was more familiar with.  I'm a different person than I was a couple weeks ago and I'll never be the same again.  In my head I keep singing the line from Wicked: "I have been changed for good". 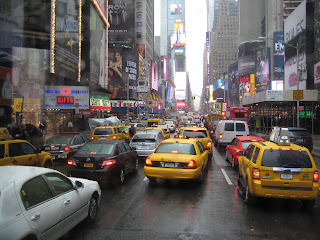 Here's one last view of the city as we were leaving.  It was sad to leave, but I'll be back..... someday.