Last year I saw this raw silk tweed online.  I loved the bright pink and white.  It looked so happy and summery!  Plus it was on sale for $4 a yard, so what was I supposed to do? I bought 5 yards thinking I could make a jacket and skirt. See how there are two different colors in the picture?  Well, there's quite a story behind that.  For once (luckily) I decided to test my fabric before I actually made anything out of it.  The silk started out looking like the fabric on the left.  I didn't want to pay to have it dry cleaned so I tried hand washing it.  The bright pink dye filled the sink and turned the white yarns pink.  So maybe hand washing was out.  Then I tried pressing the fabric.  A little bit of steam would help get the wrinkles out, but the slightest bit of moisture sent the dye running.  After testing with a few tiny drips of water it became clear that to keep this fabric in its original color I would be unable to wash it, steam it, wear it in the rain, or cry in it. I had one last idea.  I emailed the nice people at Dharma Trading Company and asked about a dye fixative.  They gave me a recommendation but they couldn't guarantee it would work.  I tried it on a small sample and it seemed to help, so I jumped in and spent half an hour up to my elbows in very hot water and chemicals.  The end result?  What you see on the right side of the picture, which is basically the result I got with hand washing.  At that point I decided I had nothing to lose so I threw the whole piece of fabric in the washer, washed it on delicate and dried it in the dryer.  It didn't fall apart so now I don't have to worry about dry cleaning or hand washing anything I make out of it.  The fabric came out of the dryer really soft, so that's an added bonus.

I had a really good picture in my mind of how I wanted this skirt to look, and this picture actually looks like the picture in my head.  Unfortunately it doesn't look nearly as good on me as it does on the dress form.  I have another skirt in a similar shape and it's not that great on me either.  I thought it was because that fabric was stiffer, but now I'm pretty sure the whole flared, gored skirt just doesn't work for me.  This was another self-drafted pattern, but this time I actually drew the pattern on paper, not directly on my fabric.  Now if I ever want to make myself another unattractive skirt I have the pattern all ready!  Just kidding, sort of.  I think adding more flare to the pattern will make it better for me. I'll have to think about that for awhile, and in the meantime I'll stick to straight skirts. 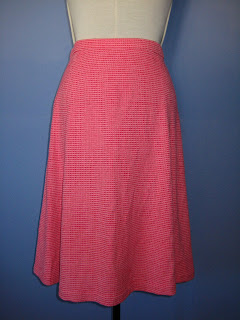 I kept the sewing super-easy on this one.  Straight waistband, no lining, and topstitched hem.  I made a half-hearted effort to match the horizontal stripe (check? tweed? whatever!) at the seams and it turned out pretty good.  The only problem I had in my visually-challenged state was the hem.  I pinned it up in a couple places and thought I could eyeball the rest, but apparently I need two eyeballs for that, not just one. It actually looks perfectly fine on the outside and I don't think many people will be asking to see the inside of my hem.  I learned a lesson and I'll be more careful next time.

If I weren't so behind on my blogging and sewing I probably would have taken the time to iron the skirt before I took pictures.  It's been wedged in my closet with all the other skirts I've made and haven't worn.  Stay tuned though, I've got some other finished projects that.... aren't skirts!