If you read my last post you know I've been suffering from some vision difficulties.  I had to think long and hard about what activities I was willing to give up and what activities could be adapted to my partial blindness.  Well, I sew.  It's part of who I am.  It's my creative outlet and has helped me cope with other stresses in my life, most notably the birth of my twins 20 years ago.  I suppose I could have sat back and waited for my eye to heal (I'm still waiting!) but instead I decided to face the challenge of sewing blind (ok, half-blind) head on and see what happened.

I had been waiting anxiously for May to join the Summer 6PAC sew-along at Stitcher's Guild.  The idea is to sew a 6-piece collection of items that can be mixed and matched, and will coordinate with my existing wardrobe.  This makes SO much more sense than my previous plan of sewing a skirt every month for a year.  At the end of 2011 I had about 10 skirts that didn't match anything and they're still taking up room in my closet.  At the end of April I was in Utah picking my daughter up from college and we went to Yellow Bird Fabrics in Salt Lake City where I found some navy woven cotton-lycra fabric with white polka dots that I just had to have.  I guess that was the inspiration for my collection. 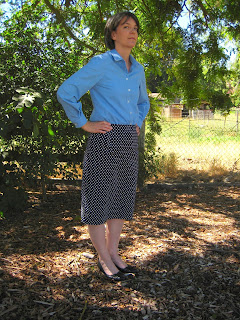 May came, we shipped our daughter off to London, and I was home alone, half-blind, and in desperate need of some activity to keep me busy and productive.  I decided to tackle the polka dot fabric.  It really wasn't heavy enough for a fitted skirt but I didn't let that stop me.  I knew what I wanted and I was determined to have it.  I've created a fairly decent pencil skirt pattern over the past couple of years.  The only problem is, it has a yoke and princess seams and I didn't want anything breaking up the polka dots.  Now it would have required very little effort to trace the pattern pieces onto a new piece of paper and change the princess seams and yoke into darts, but I wanted to start sewing right away.  My backup plan (and not my most brilliant idea) was to lay out the pattern pieces on the fabric, overlapping the seam allowances, and trace around them.  Not the most accurate way to get my pattern, but I suppose it worked.  This is about the time I realized that using scissors with one eye (and therefore no depth perception) is more difficult than one might imagine.  Maybe it didn't matter that my pattern wasn't that accurate, because my cutting definitely wasn't either!  The sewing itself didn't go all that badly for my first one-eyed effort.  The invisible zipper in the back has a little bump at the bottom but everything else worked out just fine.  That's a good thing, too, because unpicking stitches is another difficult task with one eye.  I suppose I should also admit that I thoroughly messed up the lining, not because of my vision but because I was in a hurry.  I've never gotten around to drafting a lining pattern for this skirt so I just copied the skirt pieces and figured I'd deal with the back vent when I got to it.  I won't go into any more detail, but I'll never show anyone the inside of the skirt!

Despite the imperfections I actually love this skirt!  It's comfortable, fits reasonably well, and I've worn it several times already.  I will definitely be drafting a proper pattern for this skirt so I can make it again.