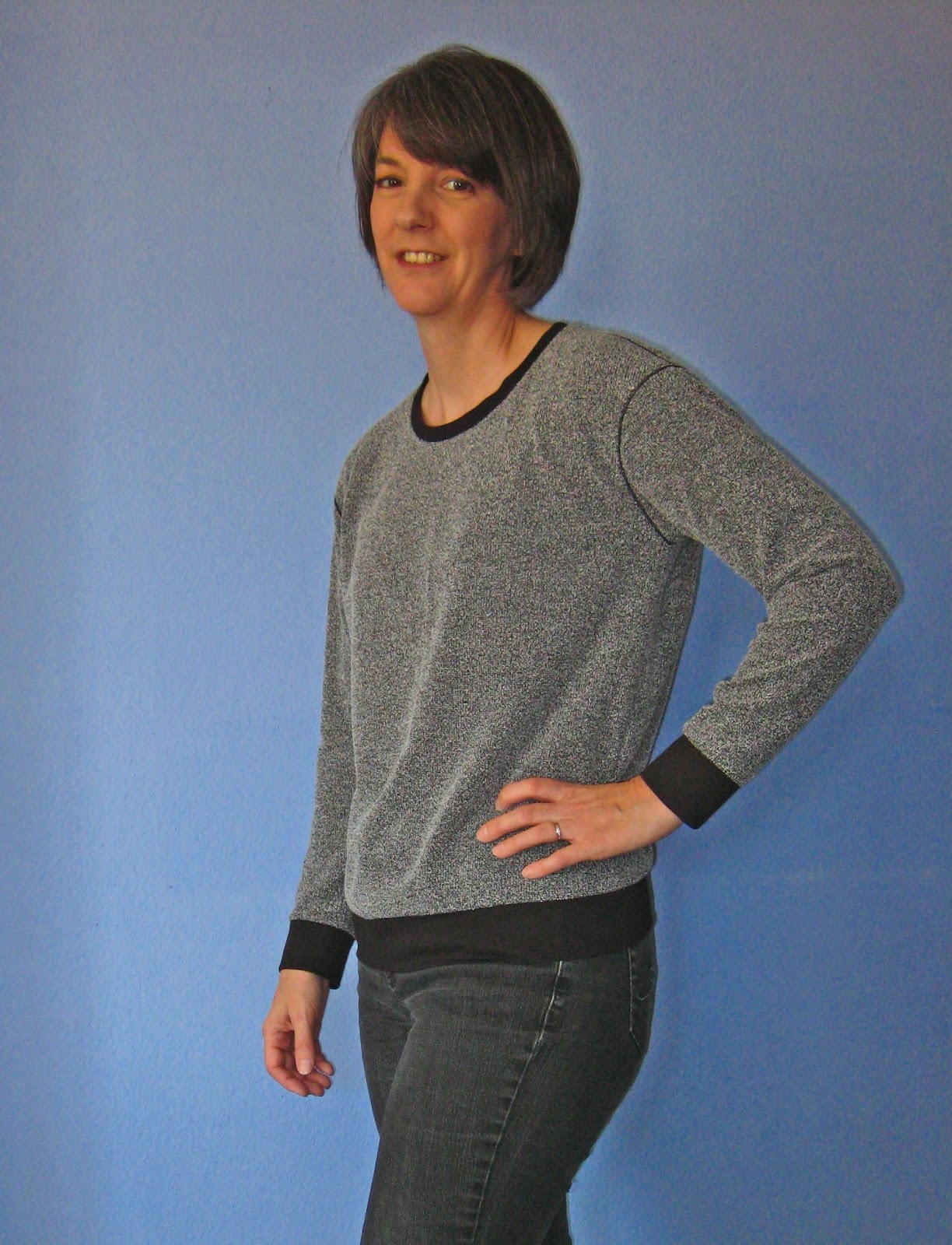 I'm not a big follower of fashion trends, but have you seen those sweatshirts in the magazines and catalogs made out of something nicer than sweatshirt fleece?  That's a trend that I think would work well for me. I want to be casual and comfy but I don't want to look like I just rolled out of bed.  It's a great project for fall, am I right?

I already had the perfect fabric in my stash, a polyester/rayon "sweater knit" in a black and white tweed. It's really terrycloth, which for some reason I didn't realize when I bought it. I love the look of it (and I already have a skirt made out of it) but I can't completely get over the feeling that I'm wearing a towel. By the way, I'm not sure there is really such a thing as tweed terrycloth, but that's what it looks like so that's what I'm calling it.

What I really needed was a chunky black ribbing to go with it. I found some great ribbing in brown and gray, but no black. I checked all my favorite online fabric sources and still no black.  Plan B turned out to be some black Ponte that I found on sale. I wasn't sure it would work for the neck edge. Would it hold the curved shape of the neckline or would it want to stand straight up? I pondered that problem for a long time, and also formulated plans C and D, before I finally just cut a sample and tested it. It seemed to work well enough so my ribbing problem was solved.

The next challenge was coming up with a pattern. I already have a self-drafted t-shirt pattern so that seemed like a good place to start. I love the raglan-sleeved sweatshirts I've seen in stores but I look terrible in raglan sleeves so that wasn't an option. Dropped shoulders are definitely much better on me so I measured across my shoulders to where I thought I wanted the sleeves to hit and extended the shoulders of my t-shirt pattern by 2 1/4".  I also lowered the sleeve cap by about that amount.

I really had no idea how much ease I wanted in the sweatshirt so I took a trip to the mall and tried on a couple. I came up with some general measurements (at least 6" of ease, 14" upper sleeves, bottom band around my hipbones) and adjusted my pattern accordingly. The pattern seemed to come together really well. Almost too well. Could it really be that easy? At this point I started to feel a little panic. What if this project didn't turn out? What if I put in all this time and had nothing to show for it? What if I fail? These are the kinds of thoughts that have haunted me all my life and kept me from trying new things. Time to let go of that. For goodness sake, it's just a sweatshirt!

I finished the pattern and cut out the fabric. There was one more detail I wanted to add so it wouldn't be too plain. My plan was to sew a 6mm coverstitch along the shoulder and armscye seams, from the wrong side, with wooly nylon thread in the looper. This would give a thick black line of stitching on the right side to set off those seams. I tested the stitch, adjusted the tension, and kept testing, adjusting and practicing until it gave exactly the effect I wanted. Then I stitched the first shoulder seam. It started out great then something went wrong and the rest of the stitches were all loopy. Back to my test fabric (a piece of the sweatshirt fabric). Everything was great on the sample, but it would not work on the sweatshirt! There was no difference between the test piece and the sweatshirt, but apparently my machine could tell the difference and took great pleasure in thwarting my plans.

Ok, I'm smarter than a machine but I know when to fight for what I want and when to switch gears. Time to save my sanity and try something different. I switched to the narrower 3mm coverstitch, the stitching worked beautifully, and although I still would have preferred the wider stitch I love the finished effect. 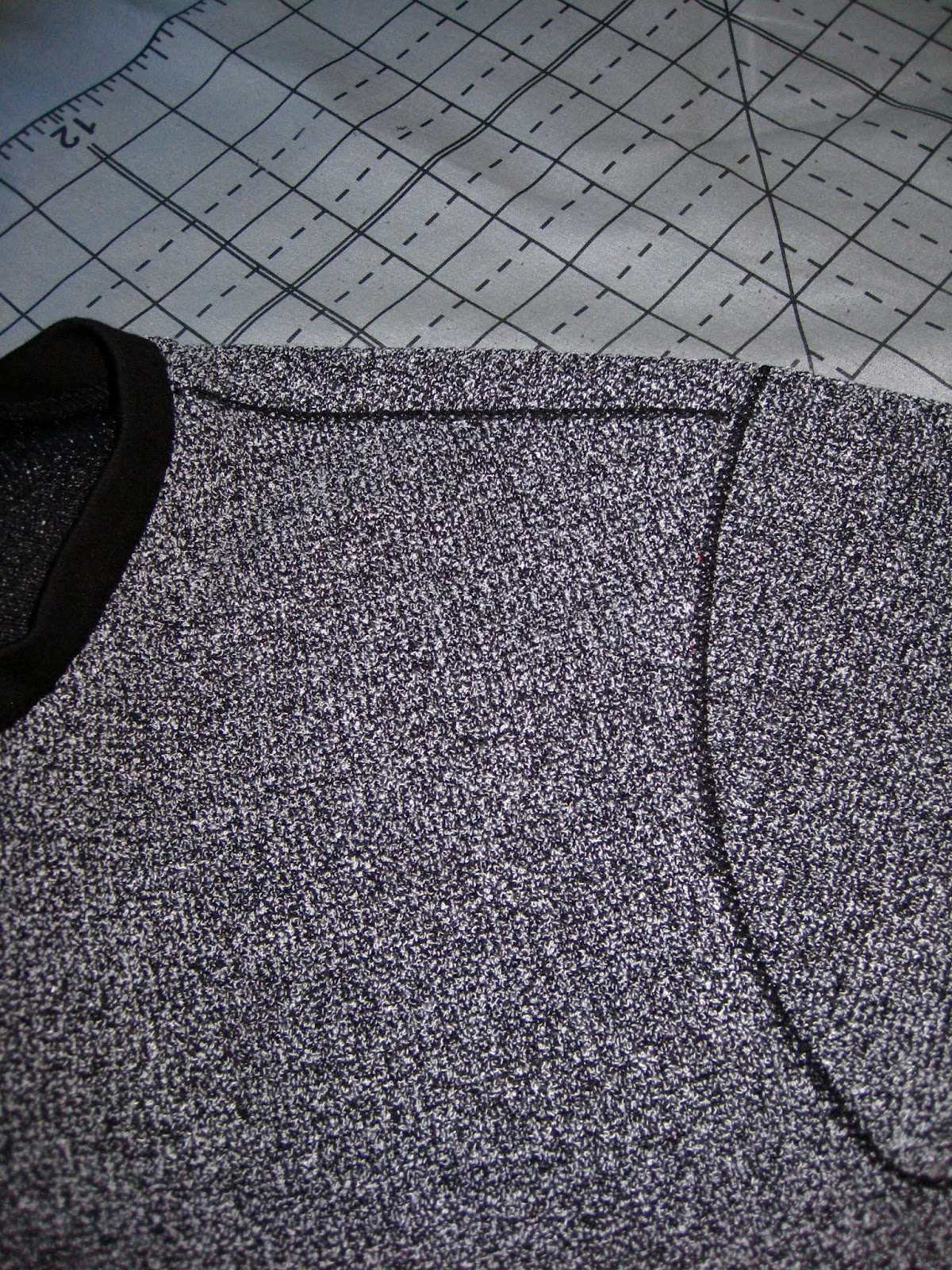 The neckband went on easily. I should have cut the piece a little shorter but it's good enough that I'm not about to redo it. The sleeves turned out to be the perfect length.  I pinned the bottom band around my hips, decided where I wanted it to sit, and shortened the sweatshirt to that length. An easy and quick alteration to the original pattern.

The actual sewing time was really fast. Now that I have a pattern I could whip out a whole wardrobe of these things in no time! I learned a couple things that I'll take into account next time:

1. The shoulder seams aren't quite in the right spot. I didn't notice on my t-shirts but the extended shoulders accentuate the problem. It doesn't bother me that much because a ready-to-wear sweatshirt would be the same or worse, but I'll fix the pattern for next time. 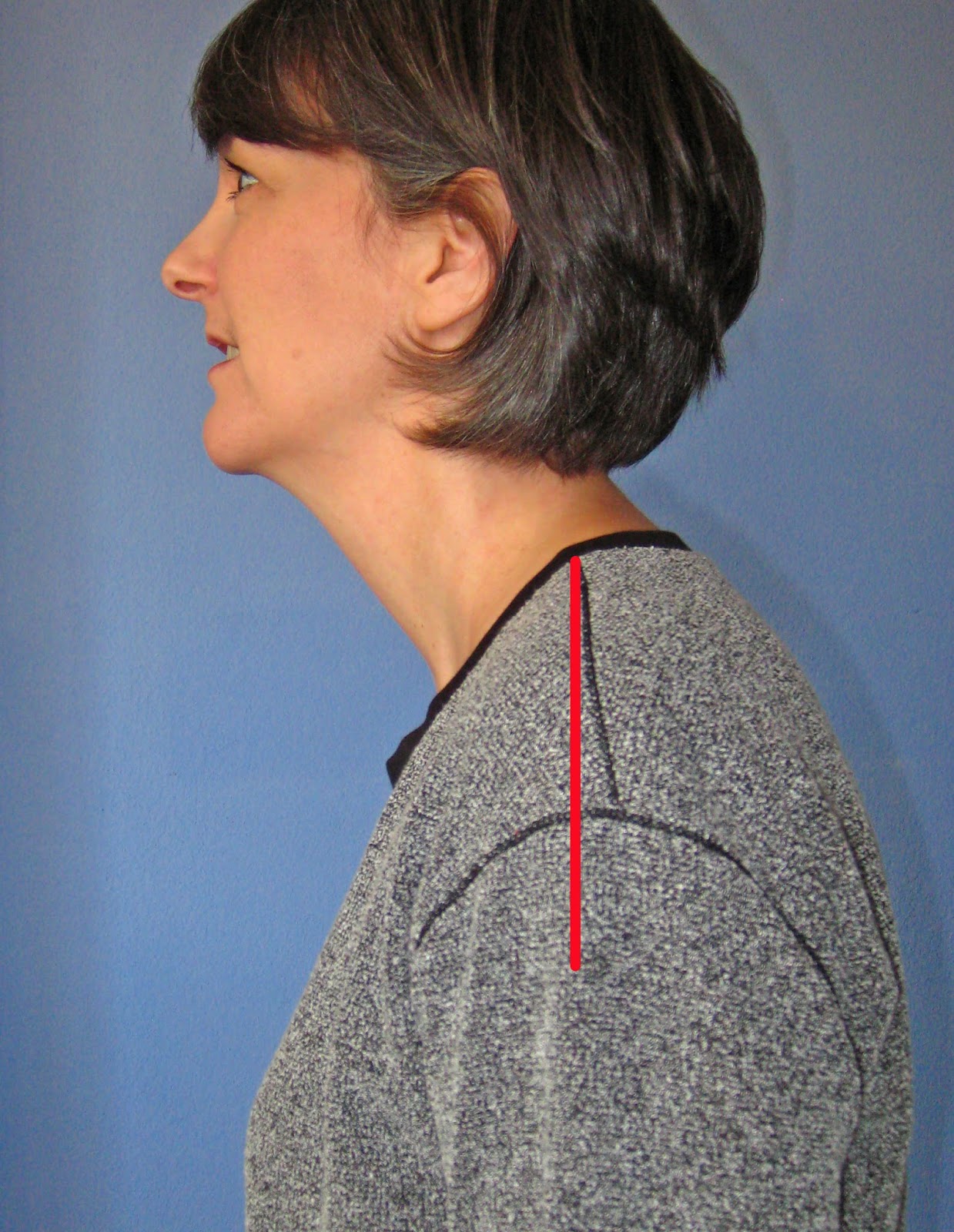 2. Ponte doesn't make the best ribbing substitute. It's stiff and doesn't stretch a lot even though it contains spandex. If I push the sleeves up to my elbows I might just cut off my circulation. 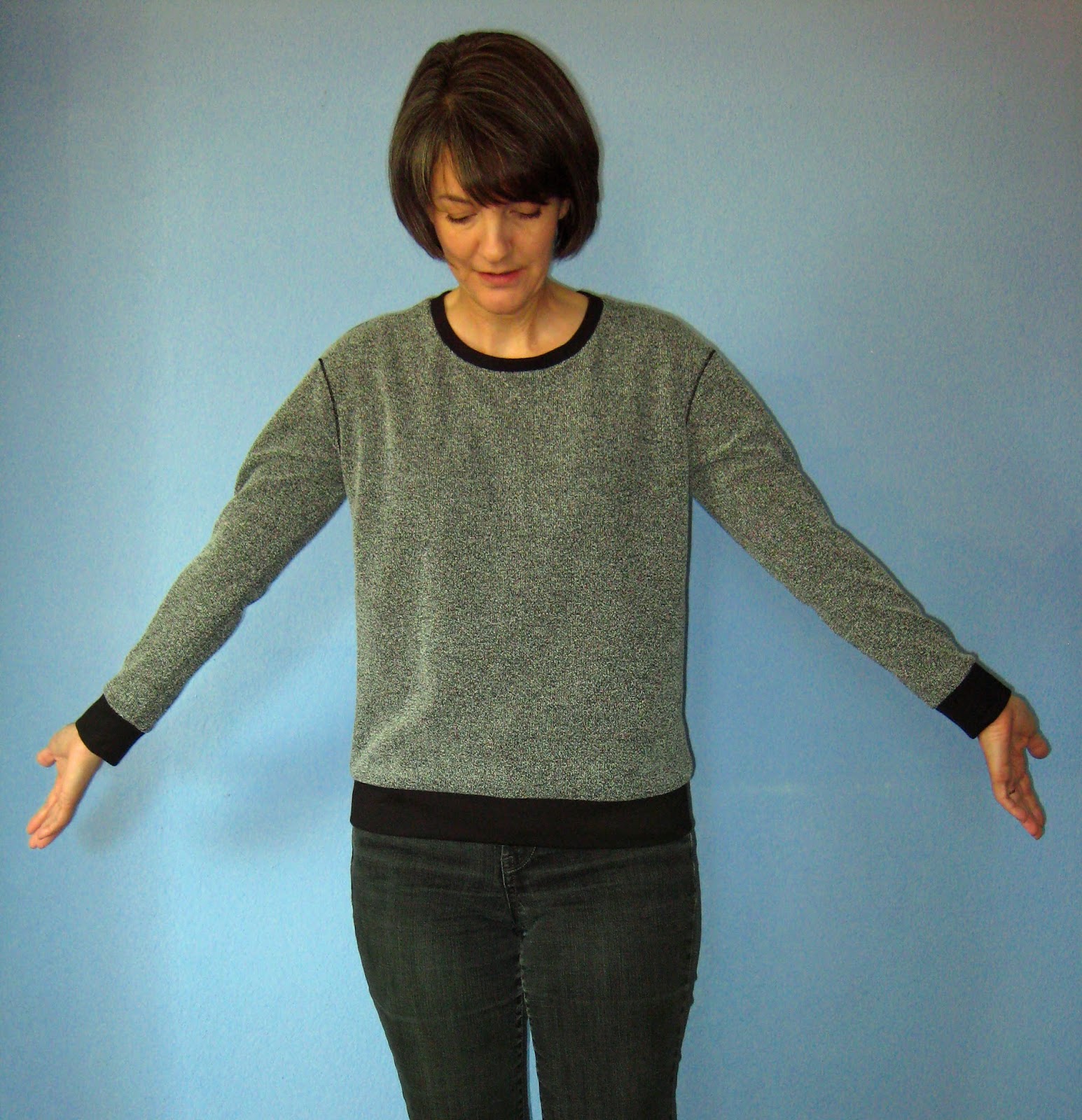 Despite the imperfections I love this sweatshirt! I'm looking forward to wearing it and to making a few more like it.
at September 27, 2013