I've been working on a huge project.  Well, the mostly-finished product doesn't look that huge, but the process sure felt like it!  What is a mother supposed to do when her daughter says she just might die if she can't be Daisy Buchanan for Halloween?  Now, this isn't a grade school aged daughter throwing a bit of a tantrum, but a college student studying costume design who has just seen "The Great Gatsby" for the third time and is having a perfectly understandable emotional response to the amazing costumes in that movie.  If that mother is an over-achiever type with some sewing ability, who thinks she can do anything (with sometimes disastrous results) then she drops everything to make a Great Gatsby inspired dress for her daughter.

You would think that with the popularity of Downton Abbey and The Great Gatsby there would be all kinds of 1920's costume ideas all over Pinterest, but I really didn't have much luck there.  I found very predictable-looking flapper dresses, but that's not at all what I wanted.  I used to be a costume purist. If something was set in the 1920's I expected the costumes to be authentic to that time period.  I got over that last year on my field trip to New York City.  One of our stops was at a costume shop, where the owner talked about their design process.  He actually used the 1920's as an example, saying that the styles of the 20's were shocking for their time, but the boxy shapes might seem a little frumpy today.  If an audience is to get a feel for the mood of a show set in the 1920's, the costumes need to have enough modern influence that the audience can interpret them correctly.  Now that I understand that, I can truly appreciate the artistic genius of Baz Luhrmann and Catherine Martin.  They put more details into one movie than I've ever had in my brain in my entire life.  With that in mind, what I wanted was not an authentic 1920's dress, but a dress inspired by both the 20's and by "The Great Gatsby".

I decided I wanted a bias-cut dress so that it would be somewhat form-fitting, with seams mostly on the straight grain so it would be easier for me to sew.  This was my first general idea (and yes, I know I'm not an artist): 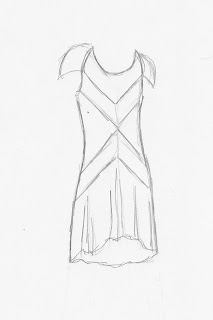 I generally hate dresses with a shorter hemline in front (aka mullet dresses) but for some reason it seemed like that's how this dress should be.  I had no idea what to do for the sleeves, I only knew there needed to be sleeves and I figured I'd slap a square piece of fabric on the shoulder, with one corner hanging down the arm, and see what happened.

I have a duct tape "double" of my daughter so I draped this basic design on the form, first in paper then in rayon challis.  It turned out that my design lines wouldn't quite work right on my short-waisted daughter so I had to make some changes, but I kept the general idea.  This was the first attempt, sort of: 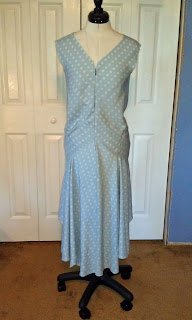 This is actually the back of the dress.  I put it on the dress form backwards because the front looked so horribly bad but I wanted to text a picture to my daughter.  The bodice looks basically the same either way, but the "mullet" hemline?  Well, it turned out looking more like a "pageboy" hemline.  My measurements made sense when I drafted the skirt pattern, but between the diagonal hip yoke and the effect of the bias the skirt ended up being nearly straight across in front, above the knee, then curving sharply down to the back where again it was almost straight across.  Epic fail, but at least it was an easy fix.  Luckily at this point in the process my daughter came home for a 2-week summer break so she could help with and try on the final product. 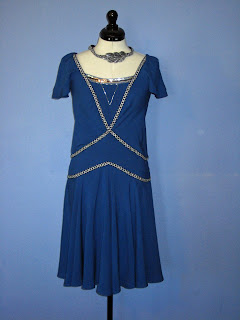 We made some design changes, re-cut some pattern pieces, and added some trim, beads, and sequins.  There were small challenges along the way but we muddled our way through them.  My daughter made the headband that's hanging around the neck of the dressform.  She didn't finish the beading before she went back to school but I'm sure she'll be able to finish it before Halloween.  The dress is certainly not perfect, but I actually think it's beautiful, and it was really fun to be able to stretch my draping skills to the limit and to work together on a project with my daughter.