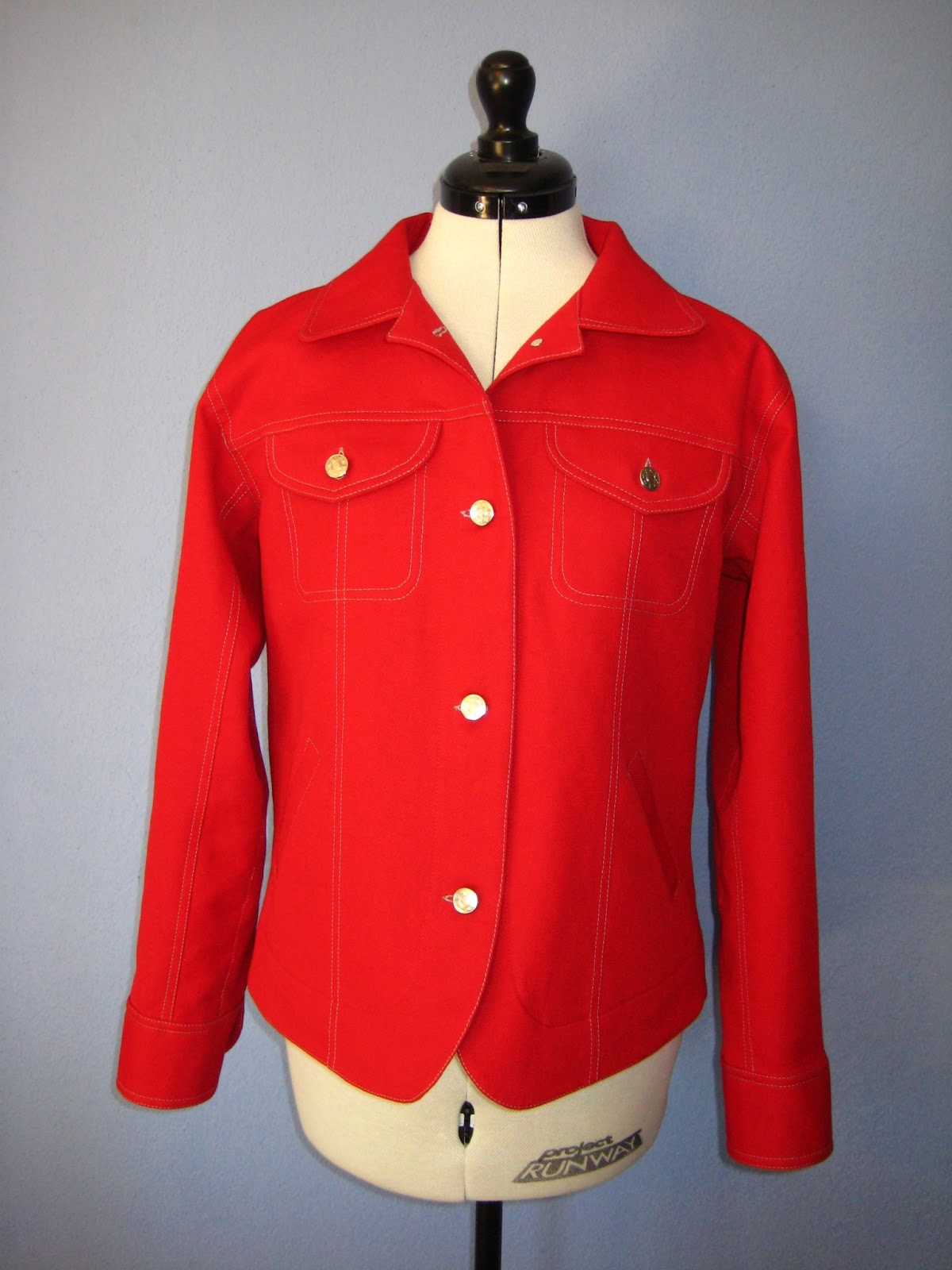 When I saw the Craftsy.com class "Sew Better, Sew Faster: Garment Industry Secrets" I knew I had to have it.  I think I sew at an intermediate to advanced level but I'm trying to undo years of thinking home sewing methods are the best and learn industry techniques.  Luckily I still had my 50% off coupon left over from joining Craftsy so I got a great deal on this class, which also included the jacket pattern.  My favorite things about the class were no pins and no hand sewing.  I watched all the class videos before my pattern arrived in the mail and prepared my fabric, a red cotton pique that I bought online a couple years ago.  I ordered my threads (regular and topstitching) and topstitching needles from Wawak.  I live in the next-day delivery area so they arrived before my pattern.  I had just recently ordered some interfacing from fashionsewingsupply.com, so by the time my jacket pattern came in the mail (which only took a few days) I was ready to go!

I should have watched the videos again as I sewed the jacket but I was just too impatient.  Not that I really forgot how to do anything, it just would have been nice to have the little reminders right there with me.  I mostly followed the written instructions from the pattern but I thought the videos were much better.  The only time I varied from the video instructions was with the buttonholes on the pocket flaps.  I knew there was no way my machine could handle those buttonholes after the flaps were attached to the jacket so I made the buttonholes right after I topstiched the pocket flaps. 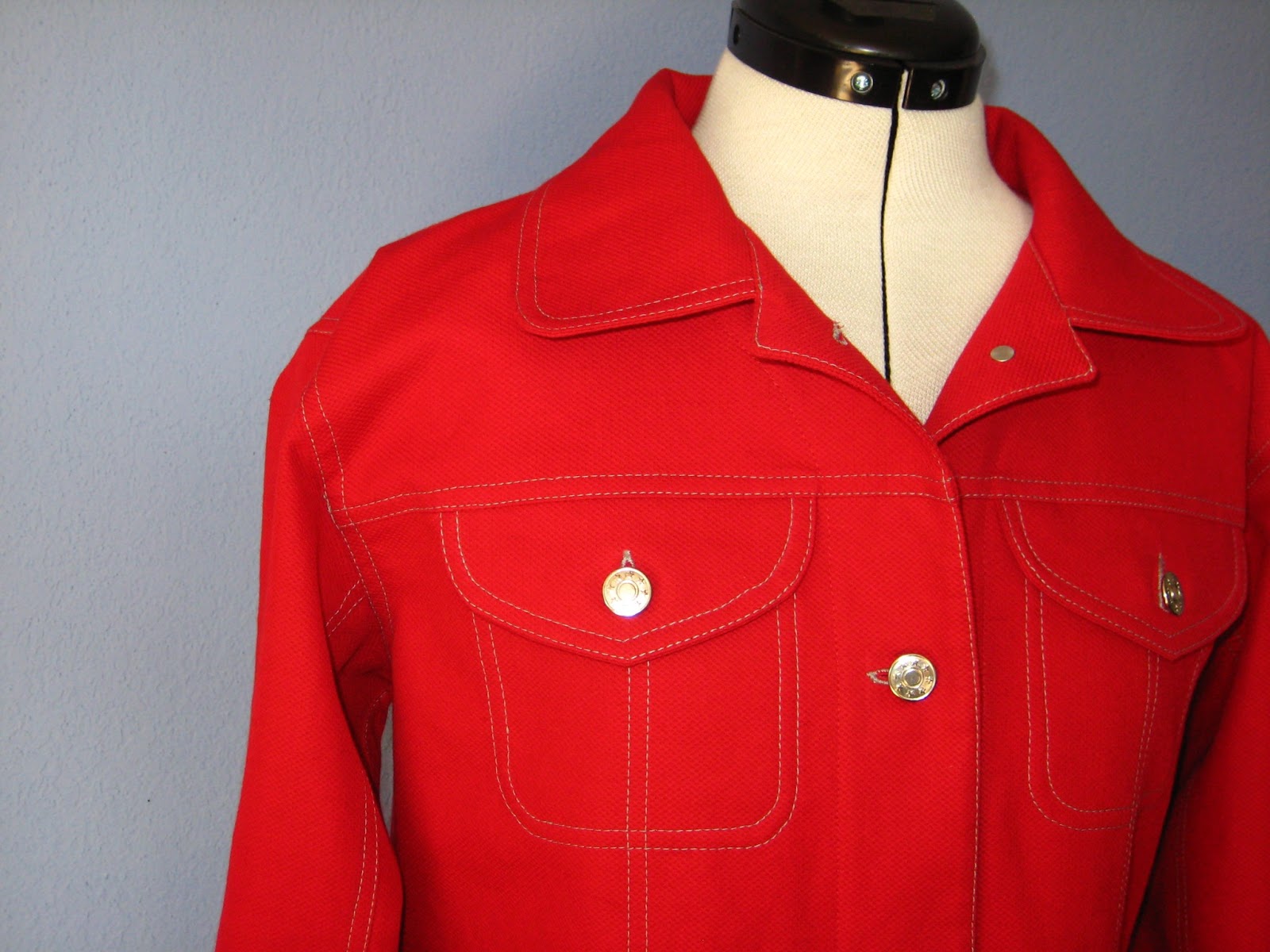 The topstitching was not exactly challenging, but a good exercise in taking the time to do things right.  I had just bought a stitch-in-the-ditch / edgestitching foot for my machine a couple weeks earlier and I found that it was really helpful in doing the edgestitching.  I moved the needle 3 positions to the left and aligned the flange on the foot with the edge of the fabric.  That worked great on straight edges but I still had to be careful on the curves because the flange is far enough in front of the needle that a curved edge will throw off the spacing.  I don't have a 1/4" foot (maybe my next purchase?) so the topstitching that's 1/4" from the edge was a little more challenging.  Again, not too bad along the straight edges because I lined up the edge of the fabric with a line on my foot, but I couldn't tell where I was at on the curves.  It would have made a lot more sense to move my needle to the right and line up the edge of the fabric with the edge of the foot, but I didn't think of that until later. I ended up having much more success when I marked the topstitching lines with chalk on the curves.

The only other challenge I had was with the buttons.  I planned on using some nickel-colored jeans tacks that I had ordered from Wawak several months ago.  I made the buttonholes on the pocket flaps to fit those buttons.  When it came time to do the buttons and buttonholes along the front edge I decided to practice attaching the jeans tacks.  The first sample was bad. I hammered the back onto the button and the whole thing was at a weird angle.  I tried again, still bad.  I was a little confused because the tack part of the button was longer than the shank, so how was it supposed to fit inside the button?  Maybe I was attaching it wrong? I turned to Google for help and found this great You Tube video on jeans tacks.  Turns out I was using a lower quality variety that was doomed to failure.  The video suggested buying jeans tacks from GrommetMart.com, and after searching all over online for other options that's finally what I did.

I'm going to take a minute and vent about places that have good prices and high shipping costs.  If I had seen that the cost of my jeans tacks was $30 with free shipping, or $25 with $5 shipping I would have bought them right away, but when they were $18.80 plus $9.17 shipping I hesitated for a few days.  I finally placed the order and was pleasantly surprised when it arrived quickly, and the 100 pieces that I had assumed would be 50 buttons and 50 tacks was actually 100 of each.  That's a pretty good price for each button if I ever figure out what to do with the 91 I have left.

This picture shows the difference in the two types of jeans tacks.  On the left is the cheaper set with a shorter shank on the button and a long smooth tack.  I tried to cut away most of the fabric from my sample so you can see how the bottom and top pieces don't line up and the whole thing is crooked.  The better type is on the right.  The button shank is longer and the tacks are shorter and have ridges.  They went together well and hold tightly. My first try at assembling the pieces wasn't perfect but it was close enough. Best of all, the jeans tacks look great on the jacket.

The pattern for the class is Islander pattern #218, Jacket Express.  I thought I'd put the "express" part to the test and I timed myself as I made it. I spent around 2 hours cutting and fusing, then another 9 - 10 hours of actual sewing.  I don't sew particularly fast and of course this was the first time I made the pattern so I thought that was pretty good.  The directions minimized switching back and forth between different threads, needles and machines, but still I found myself wishing for another sewing machine so I didn't have to change threads and needles at all.   The jacket has a boxy fit which isn't terribly flattering on me, but it fit well in the shoulders (no straitjacket effect) so I'll probably make it again but add a little shaping in the waist.
at July 25, 2013