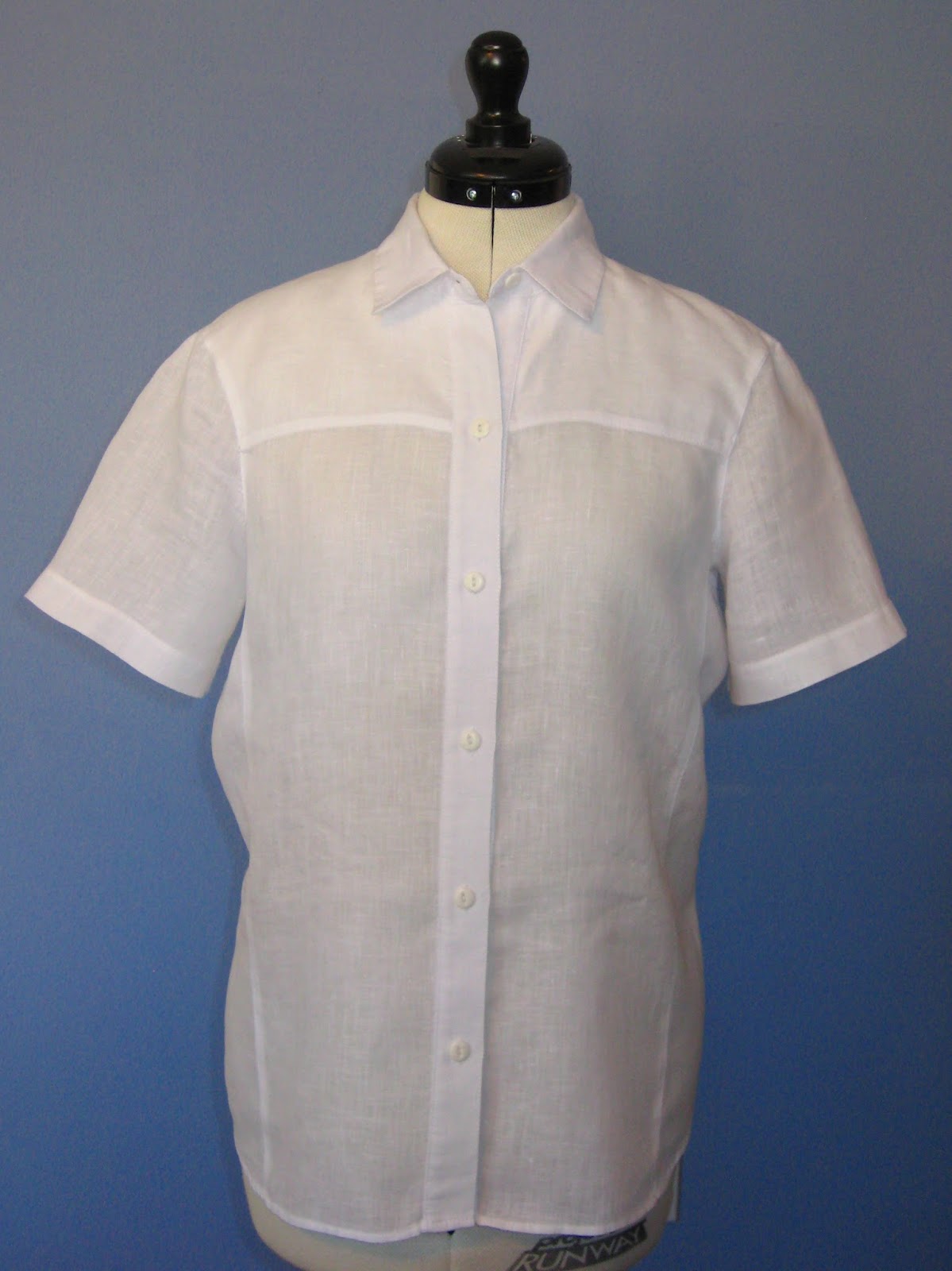 I used to have a white, short sleeved linen shirt that I loved.  Then one day we had a weird tie dye incident at our house and purple spots mysteriously appeared inside our microwave (which was obviously in the kitchen) and on my linen shirt (which was in a laundry hamper on the other side of the house). I still have no idea how it happened but the shirt was beyond saving.

For years I planned to make a pattern from that beloved shirt but like everything else I own the fit was really pretty bad, especially across my freakishly broad shoulders. Did I really want to cut the shirt apart, make the pattern, then make major changes? It sat in my to-do pile for years. Finally a few months ago I bought Vogue 8689 with high hopes of using it to replace the shirt which was showing itself all too often around my sewing room and reminding me I had a job to do.  Still I procrastinated because the thought of trying to get a shirt pattern to fit right was overwhelming. It's very tedious to try fitting the back of a garment without a fitting buddy. I have a 3-way mirror that helps some, but mostly I pin, take a picture with my camera's timer, analyze the fit from the picture, and repeat. I have neither a great camera nor a tripod so that causes problems as well.

I had worked on fitting a shirt some time ago and used those efforts for the chambray shirt I made in May. The fit still wasn't perfect but it was pretty good so I used that pattern as a guideline for my adjustments for the linen shirt pattern. I used the collar and collar band pattern pieces from the chambray shirt.
I ordered the linen online, which is always risky because you don't know how the fabric feels until it arrives. It turned out to be pretty nice and after pre-washing it I got to work.

The shirt went together really fast, no pinning, no hand stitching, this was an exercise in speed sewing. I'm pleased with the results except for a couple of things. 1. The fabric is really sheer. I planned to wear another layer under it anyway, but I didn't expect that layer to show through quite so much. 2. I made the front placket too wide. Well, I followed the pattern but I prefer a narrower placket and I forgot to change it.
I had planned on using the buttons from my old shirt but they were just a little too small for my wider placket. That meant a 20 mile round trip to the fabric store so I could buy 63 cents worth of buttons.  I came home, made the buttonholes, started to mark the buttons, and Oh. My. Goodness.  The collar pattern was for a narrower placket, so if I line up the center fronts the collar overlaps at the front edge. I'm still laughing about it. I have no intention of buttoning the top button anyway so it really doesn't matter to me. It's a good lesson learned and I won't make that mistake again.

Since the shirt won't be one of my finest works I decided to be lazy and sew the buttons on by machine. I've never done it before because I thought I needed a special foot but my sewing machine manual says to just remove the foot. That was easy. I can't believe how fast and easy it was to do the buttons that way!  Seriously, I'm never going back to hand sewing buttons.

Well, I've finally replaced a well-loved but ill-fitting shirt with a well-fitting but moderately-liked shirt. I think it's a decent trade. I'll wear the new shirt, finally throw the old one away, and I've learned enough that the next linen shirt I make should be amazing.